Hey, hey, bye, bye, bye. The bye week arrives, giving Tennessee fans a breather after 10 disappointing quarters of football. The Vols dropped to 2-3 after a 48-17 blowout loss to Alabama in Knoxville. With five games remaining on the slate, the Vols must regroup and regain confidence. Tennessee’s next opponent, Arkansas (2-2), swept the state of Mississippi defeating both Ole Miss and Mississippi State (all three programs under new head coaches). Head coach Sam Pittman and company narrowly lost to a struggling Auburn, 30-28, in what some might call a strong rebuilding year. Pittman’s Razorbacks have won more SEC games this season than the past three years combined.

Meanwhile, the Lady Vol volleyball team rested up ahead of two matchups with Georgia midweek in Knoxville. Tennessee lost two matches to Kentucky on Oct. 16 and 17 to start the season. The Bulldogs will travel from Athens for Wednesday and Thursday night competition at Thompson-Boling Arena. The Lady Vol soccer team (2-3-1), however, will exit Knoxville this week en route to Gainesville, Florida, to face the Gators Friday night at 6 p.m.

Rivalries continue to run high as each team faces a conference-only schedule. Though the format and challenges posed by COVID-19 mark new territory, passion against all foes remains a Tennessee tradition. Rocky Top Insider takes a look back at moments in that tradition this week in UT sports history:

The Blue Devils had also shut out their previous four opponents after losing 7-0 to South Carolina. Head coach Wallace Wade, in his first season, left Alabama where losses to Tennessee and other SoCon teams in 1928 and 1929 had put him on the hot seat (despite two national titles during the decade). Oddly, Wade led his team to a national championship in 1930 after he announced his resignation the previous April.

Tennessee and Neyland only lost one game in 1930 – to Wade’s Alabama team – and rode an 11-game win streak heading into the matchup. Big Orange offensive and defensive power spooked the Devils, and Tennessee extended the streak to 12 games. Only two ties, one in the latter half of the 1931 season and one in the 1932 season, marred Tennessee’s record to kick off the decade. 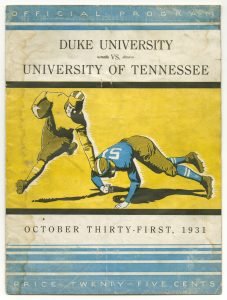 The same Homecoming weekend Tennessee picked up its most recent win against Duke, the Vol basketball teams hosted Hoopapalooza at Thompson Boling Arena (TBA) shortly after the Lady Vol volleyball team faced Florida. With Homecoming coinciding with Halloween and time change, the University of Tennessee Athletic Department looked to capitalized on out-of-town visitors, the first volleyball match played in TBA and holiday festivities.

The Homecoming parade wound through campus to the arena where a pep rally kicked off festivities before the Lady Vols dropped their first match at their current home, losing to Florida for the second time that season in three sets (0-3). However, fans and organizers seemed most excited for the basketball previews complete with autograph sessions, scrimmages and skills contests.

“We’re real excited that Hoopapalooza is going to be on Halloween this year,” former men’s Assistant Athletics Director for Marketing (now Vice Chancellor for Advancement) Chip Bryant said in a release. “It’s going to give families a safe alternative to going out trick-or-treating. All those things you’d normally do on Halloween, we’re going to have it at the arena.”

Smokey and Jr. Smokey made appearances for pictures as young fans decorated pumpkins and competed in costume contests. Children trick-or-treated with the Vols and Lady Vols basketball teams for autographs before the teams took to the courts to show off ahead of opening games.

That season, fans met Lady Vols like future WNBA forward Shyra Ely and the men’s team including NBA guard C.J. Watson. The men’s team would go 17-14 that season with a dismal 1-10 road record. The Lady Vols, by stark contrast, earned a perfect 13-0 road record and an overall record of 31-4 under head coach Pat Summitt. They finished the season with a heartbreaking 70-61 loss to UConn in the national championship game.

While the rest of the Vol teams celebrated Halloween on Rocky Top, Tennessee Soccer traveled to Athens, Georgia, where the orange and white picked up a win against the Bulldogs, 1-0.

Tennessee, ranked No. 17 in the country, improved to 13-4-1, (7-1-1 SEC) while handing the Bulldogs their fifth conference loss. More than 600 fans came out on a crisp, 68-degree day for the matchup. Lady Vol Rhian Wilkinson scored her fourth goal on the season of an assist by Ali Christoph nearly 20 minutes into play. That goal, a “rocket from the right side,” stood as the only point on the board at the end of a scrappy match.

The 2020 team takes on Florida this Friday at 6 p.m. before closing out the season against South Carolina on Nov. 6.