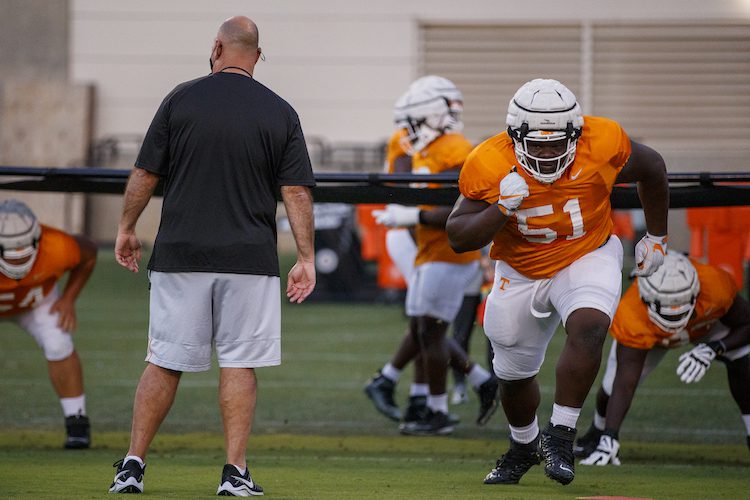 “Which one of the young guys (freshman besides Hyatt) do you see getting an increased workload of meaningful snaps after the bye week?” – Cole Jackson

Ben: I truly think you could see several. On offense, I see each position other than quarterback and tight end having a freshman the sees significant playing time during the second half of the season. At running back, Dee Beckwith is close to returning from injury and he’s a guy that absolutely help out. Javontez Spraggins should see an uptick in playing time along the offense line, while Malachi Wideman, Jimmy Calloway, and Jimmy Holiday are all candidates to play at wide receiver with Jalin Hyatt.

On defense, Omari Thomas could see an uptick in playing time at defensive tackle with the defensive line struggling mightily. At linebacker, you’ll likely see more of Tyler Baron, Morven Joseph, and Bryson Eason as Tennessee looks to establish more of a pass rush. Key Lawrence and Doneiko Slaughter will likely factor into the secondary rotation more often.

“Whose on your short list for QB, DL coach? Basketball… what are the possible rotations? We seem to have a lot of depth. Which is a good problem to have.” – Kenny Watson

Ben: To be honest, I haven’t thought about potential quarterback coaches to replace Chris Weinke. If the move is made to move on from Weinke, I do wonder if Jeremy Pruitt would promote former Notre Dame offensive coordinator Chip Long, who is working with the Vols as an offensive quality control assistant. At defensive line, I believe Pruitt’s first call will be to Tosh Lupoi, who is currently with the Atlanta Falcons. Current Detroit Lions coach Bo Davis is also a strong possibility. Either would be great hires for Pruitt as they understand what Pruitt wants to accomplish, won’t shy away from putting in the work, and will recruit well.

I often find myself sorting through basketball rotations in my head and it usually ends up with me having a headache. Tennessee has so many options that it’s nearly impossible to pinpoint a definitive rotation. It’s a great problem to have, like you said. As for a starting rotation, I think you’ll see Victor Bailey Jr. start at point, Santiago Vescovi start at the two, Keon Johnson start at the three, Yves Pons start at the four, and John Fulkerson start at the five. Josiah Jordan-James and Jaden Springer will be the first two guards off the bench, while E.J. Anosike will be the first post player to come in off the bench. Davonte Gaines, Uros Plavsic, and Oliver Nkamhoua will also factor into the rotation as well.

“Any chance we see a new QB? Seriously, any freshmen gonna play vs. Arkansas?” – VolStorm

Ben: Jarrett Guarantano will start against Arkansas and he’ll determine whether or not he finishes out the game. Brian Maurer would be the first quarterback to come in the game if need be. I think you’ll see an uptick in freshmen playing for sure because the Vols need an injection of energy. I mentioned several in my answer to the first question in this mailbag.

“How likely is it that Pruitt will make changes to his coaching during the offseason?” – RagingIguana

Ben: Very likely. Jimmy Brumbaugh won’t be the only coaching change. I guarantee it.

“What three positions, outside of QB, need serious battles leading up to Arkansas?” — Mocha Jones

Ben: Every single position on the team needs to have legitimate position battles. Bryce Thompson, Henry To’o To’o, Josh Palmer, and Trey Smith are the only players on this football team whose job shouldn’t be in question. The three positions outside of quarterback that need it the most, however, are all on the defensive side of the ball. The defensive line, linebackers, and secondary need to take a big step forward if the Vols are going to finish the second half of the season on a strong note.

Ben: Personally, I believe 3-2 is a fair expectation for the remainder of the season. It may not feel like it, but Tennessee should beat Arkansas, Auburn, and Vanderbilt to end the season. Yes, the Vols are struggling, but they have more talent than Arkansas and Vanderbilt, while Auburn just isn’t a good football team. Texas A&M and Florida are better than Tennessee, but it’s not completely crazy to think the Vols could win those football games.

“With JG in his last year, and we are loosing games by double-digits why are we not letting the other QB’s get playing time?” – Mid Tenn Outdoor News

Ben: Because Tennessee is trying to finish out the season on a high note and the coaches believe that if it’s going to do so, it’s going to be because Jarrett Guarantano turns his season around. The other three quarterbacks simply aren’t ready to lead Tennessee to victory in the eyes of the coaches. UT may reach the point of playing young players for the sake of preparing for the future, but they haven’t reached that point just yet. The Vols have to find a way to finish the season with some victories and the coaches believe the best chance of doing so is with Guarantano at quarterback.

“What’s the status with Roc Taylor? What about Dylan Brooks?” – Ann Guerin

Ben: Auburn remains Tennessee’s biggest threat for both, but Roc Taylor and Dylan Brooks still remain firm to the Vols. Tennessee will have to battle for their services until they decide to sign with the Vols, but it’s not a situation in which Vol fans should be extremely worried. It may end up doing so, but no reason to panic yet.

“Does Pruitt look determined or focused to you?” — The Return of the Orange Brown

Ben: I don’t think you’re crazy because if Guarantano doesn’t turn in a horrific performance against Kentucky, Tennessee is 3-2 right now with a chance to finish the season 4-1. But the reality of the situation is that the Vols have more issues than just the quarterback position. The offensive line hasn’t lived up to its potential, not enough receivers are creating separation, the defensive line is awful, the pas rush is nonexistent, and the secondary has really struggled. The quarterback position is not good, but it’s not like the rest of the team is perfect either.

“Do you feel like Pruitt is holding Chaney back? Sure seems that way.. running the ball on 3rd-and-7 few times.. I wasn’t expecting us to beat Bama but I feel Pruitt quit.. we could have made it respectable.. defensively we aren’t as good as I thought we’d be.” — Stevie Duckett

“Who will be calling 3rd-and-7 plays?” — Hillbilly Bopper

Ben: Chaney is being held back, but it’s not by Pruitt. The quarterback position is holding him back. Chaney has very little trust in his quarterbacks and as a result he’s not being very creative with the offense. I refuse to believe Chaney just forgot how to coach when he arrived in Knoxville.

The third-and-long play calls were frustrating at times, particularly at the end of the game because it felt like the Vols were waving the white flag, but at least there was a legitimate explanation given by Pruitt when asked about the decision to run so often on third-and-long. Alabama had given up long runs on third down in its first four games and Tennessee tried to take advantage of that weakness it identified on film. To the Vols credit, it did work a couple of times.

Ben: Obviously quarterback because it’s the most important position in sports. Tennessee must add a transfer quarterback this offseason so it’s not relying on freshman Kaidon Salter or freshman Harrison Bailey. But the defensive line isn’t far behind. The SEC is a line of scrimmage league and Tennessee lacks talent and depth up front on defense. You’re not going to win many games if you don’t have players that can make plays along the defensive line.

“When is basketball season?” — Dylan Palmer