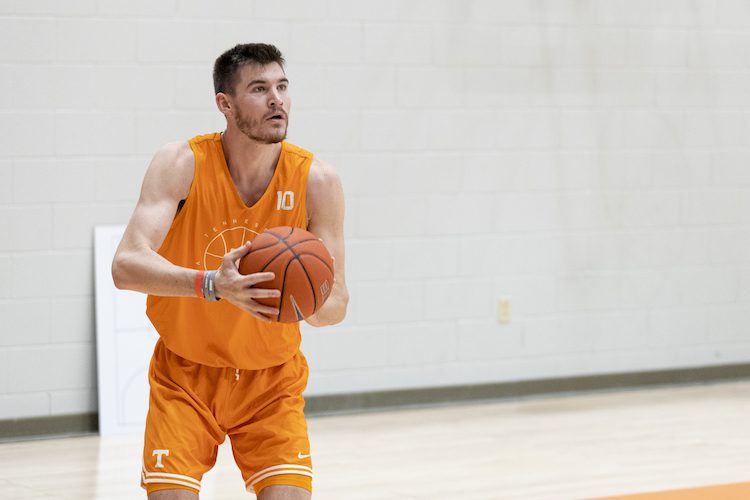 Vols senior forward John Fulkerson has been named to the 2020-21 Karl Malone Watch List, the College Basketball Hall of Fame announced on Thursday.

The award is given annually to the best power forward in college basketball. Fulkerson is one of four candidates from the SEC, joining Kentucky’s Isaiah Jackson, LSU’s Trendon Watford, and Texas A&M’s Kevin Marfo.

“Karl Malone attended Louisiana Tech University due to its close proximity to his hometown of Summerfield, Louisiana,” the HoopHall awards writes. “He led the Bulldogs to a Sweet 16 appearance and earned All-Southland honors in his three seasons while averaging 18.7 points and 9.3 rebounds per game.

“Nicknamed “The Mailman” in college because he always delivered, Karl Malone was not only one of the game’s great finishers in the open floor but also a polished offensive weapon in the half-court sets the Utah Jazz ran to perfection. John Stockton ran the point as the rugged Malone filled the lane or rolled to the basket. In fact, “Stockton to Malone” became the feared calling card of a devastating duo that produced nearly 1,000 wins with the same franchise and two trips to the NBA Finals.

“The 14-time All Star was named the NBA’s Most Valuable Player twice in his career and also earned All-NBA First Team honors for an astounding eleven consecutive seasons starting in 1989. Malone scored 36,374 career points, second only to Kareem Abdul-Jabbar at the time of his enshrinement and scored 2,000 or more points a record twelve seasons, including eleven in a row. Malone won gold medals at the 1992 and 1996 Olympic Games, the first coming as a member of the original Dream Team.”

The Karl Malone Award is one of five collegiate position-specific awards sponsored annually by the Naismith Memorial Basketball Hall of Fame. The winner of the 2021 Karl Malone Award will be announced on April 9.

Fulkerson is coming off a 2020 All-SEC Second Team (Coaches) appearance. The 6-foot-9 forward scored a career-high 27 points in an upset win at Kentucky in March and led the team with 13.7 points and 5.9 rebounds per game. He was second in the SEC in field-goal percentage at .612.