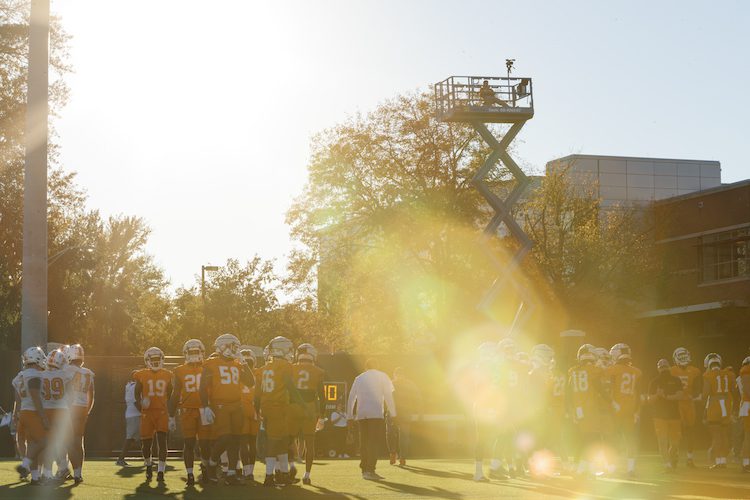 “How do we improve on both sides on third down and red zone?” – Mocha Jones

Ben: It’s as simple as execution. If Tennessee is going to succeed the second half of the season a big reason will be because it finds success in the red zone and on third down. The Vols are dead last in third down conversions this season, as they’re picking up a first down just 26.1% of the time. On the flip side, opponents are picking up a first down against the defense 47.1% of the time which is third-worst in the conference.

Tennessee is just as bad in the red zone on both offense and defense. On offense, the Vols rank eighth as they’re converting 83.3% of the time. They rank 12th on defense as opponents are scoring 91.9% of the time. The Vols need to lean on the running game more in the red zone where the field shrinks. There isn’t a lot of trust in Jarrett Guarantano to execute when the field shrinks.

“Why is Chaney so pass-happy? It doesn’t take a genius to figure out that we should run at least 35x every game. We would literally be better off most times to put a running back at QB and run three straight down. Why do I know this but Jim Chaney doesn’t?” – Murky Creeks

Ben: The stats would tell you that Jim Chaney hasn’t been pass-happy this season. Guarantano has thrown the football 135 times this season, while Ty Chandler and Eric Gray have combined to run the football 141 times. Chaney has actually struck a good balance. The problem is that there doesn’t need to be such a great balance. Now, you still need to throw the ball in an effort to prevent the defense from loading the box to stop the run, but Tennessee needs to have an offense that primarily focuses on running the football the second half of the season. It needs to be almost a 65-35 split. That’ll require the offensive line stepping up and playing more consistent football, which they’re capable of.

“What are the metrics used in deciding starting offensive players and how is that data reviewed or is it literally an eye test at practice?” – Big Booch

Ben: It seems as if it’s an eye test, but I’m sure there are plenty of graduate assistants charting particular things the staff looks for during practice. We’re just not privy to that information. Pruitt talked this week about when he knows a young player is ready to play in a game and he alluded to the fact that they simply standout in practice.

“Most of the time you can see guys in practice,” Pruitt said on Vol Calls. “I’ve seen a lot of guys that maybe are pretty good drill players or things like that, but then when you get them in a scrimmage setting, they kind of disappear. You see guys that really have a great understanding of what’s going on. But when you get them in a scrimmage setting, they don’t make a whole lot of plays. And you see it the other way. Guys that aren’t very good drill players, or maybe they don’t have a very good understanding, but when you start getting in a scrimmage setting where you play football, they show up.

“It’s not hard. Usually guys that do it the right way show that they’re ready, they stick out. It’s pretty easy to see.”

“Are we at the point that we as a fan base need to accept the fact that we are just a 5-7 win program, and every 5-6 years, we might win 8-10 games? I just feel like we don’t take a step forward, and when we do, we take two steps back.” — BurnerKesling

Ben: No. Tennessee is still, and always will be, a program that should compete for championships. It should always be the expectation because the resources are in place to win championships. That doesn’t mea it will be easy, as the last decade has proven. It does feel like Tennessee always takes two steps back after taking a step forward and that’s because of the decision-making at the top since Lane Kiffin left for USC. The decision to hire Derek Dooley was a bad one, as was Butch Jones. We’ll see how the decision to hire Jeremy Pruitt plays out. This weekend’s game against Arkansas will be very telling.

“Will JG come back next year? Hear he is great in practice and is improving each week.” — Smokey’s coat

Ben: I know this question is flavored with sarcasm, but I would be surprised if Jarrett Guarantano returned next season regardless of how the rest of this year plays out.

“Why does it take TDOT so long to complete a project?” – Justin

Ben: You tell me. It’s the most annoying thing on the planet. And they pick the worst times during the week to work on the projects.

“Who is holding back the offensive play-calling? When Chaney was here under Dooley, the offense was not the problem. He is the highest paid OC in the country. There seems to be no creativity and the same basic plays every game. Chaney, Pruitt or players?” — MJWilson81

Ben: The quarterback position is holding the offense back. Jim Chaney and the offensive staff have very little confidence in Jarrett Guarantano and the rest of the room that they’re not being nearly as creative as they want to be and need to be. They’re terrified of the Kentucky game happening all over again. They’re terrified of the position single-handedly losing them the football game, so they try to prevent as much as possible putting him in a spot to where he has to make a play. And when you have to give the quarterback that type of treatment, there’s very little that you can.

“When does the pain stop?” — RockyTopVawl

Ben: This weekend. Tennessee will beat Arkansas on Saturday to snap its three-game losing streak.