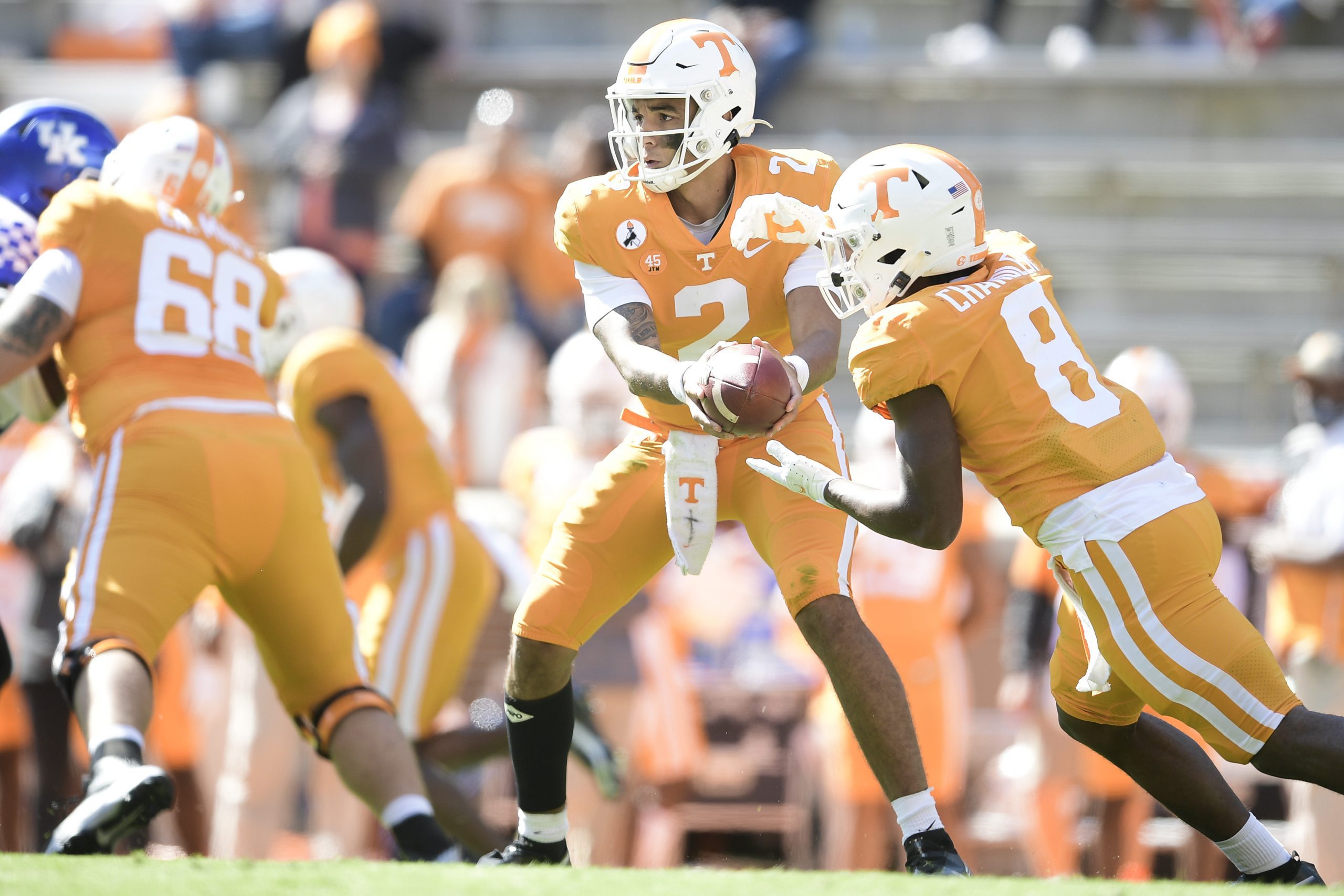 Here’s a look at the matchups within the matchup between the Vols and Razorbacks:

It’s hard to give Tennessee’s passing attack led by Jarrett Guarantano the advantage over anybody, especially an Arkansas defense that has picked off the third-most passes (10) in the country. Which is why the Hogs get the advantage in this matchup.

Whoever wins this matchup will likely win the game. When Arkansas has forced turnovers this season, the Hogs have won and threatened to upset teams. When they haven’t, they’ve struggled. Tennessee can’t have a repeat of the Kentucky game.

Arkansas gets the edge in both passing matchups. Tennessee’s pass defense has been abysmal over the middle of the field, which is where Feleipe Franks and star receiver Treylon Burks have had a great connection over the slot all season long.

Opponents are averaging 13.0 yards per catch over the middle of the field against Tennessee this season. They’re completing 76% of the passes they attempt. Arkansas has the weapons to take advantage of the glaring weakness if the Vols haven’t sured up the middle of the defense over the bye week.

The area Arkansas has struggled the most this season has been against the rush. The Hogs are allowing 178.20 rushing yards per game which is the third-most in the conference. While Tennessee’s offensive line has underperformed to this point, the unit will be as healthy as it’s been all season long. It must assert its dominance and open up holes for Eric Gray and Ty Chandler.

Tennessee has also struggled to stop the run this season. The Vols will have their hands full once again on Saturday against an Arkansas rushing attack that doesn’t standout on the stat sheet, but found their groove last weekend against Texas A&M. Talented running back Rakeem Boyd rushed for 100 yards on 18 carries as Arkansas rushed for a season-high 222 yards against the Aggies.

Arkansas’ special teams unit has been partly non-existent this season. The Hogs have returned just one kick for 10-yards this season, and just one punt for a loss of one yard. Tennessee hasn’t necessarily lit the world on fire in the return game either, but the Vols have more potential to do so.

Both teams are as capable as the other in the kicking game. Duke transfer AJ Reed is 5-of-7 on the season for the Hogs, though he has not connected from further than 40-yards. Tennessee’s Brent Cimaglia is 2-for-4 on the season and hasn’t had many opportunities of late.

Tennessee punter Paxton Brooks is averaging 43.2 yards per punt, while Arkansas has had three different punters punt the ball this season.

To this point in the season, Arkansas’ coaching staff has coached up its football team much better. It’s led to the Hogs exceeding expectations midway through the year. On the other hand, Tennessee has underperformed as a result of the Vols’ coaching staff not getting the most out of their team.

Arkansas doesn’t have a distinct coaching advantage. Tennessee has the coaches to out-coach the Hogs. But with the way both teams have performed this season, Arkansas’ coaches deserve the nod more than Tennessee’s coaches do.