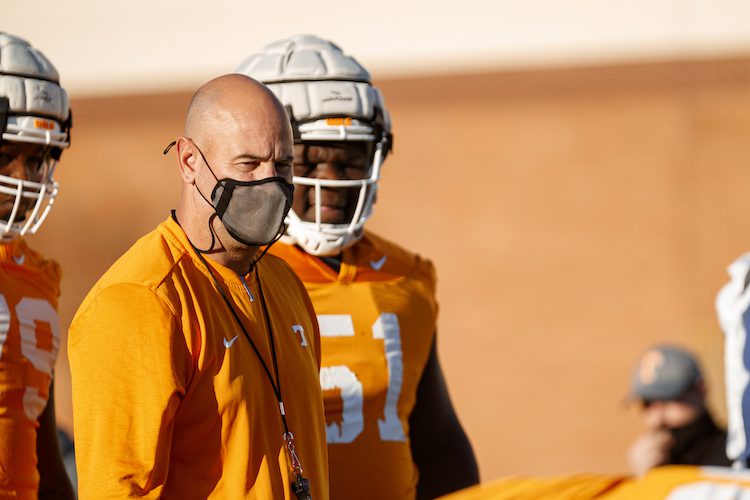 Vols head coach Jeremy Pruitt appeared on the SEC Teleconference Wednesday to discuss what is next for Tennessee following the postponement of Saturday’s game against Texas A&M.

Pruitt also discussed how he would evaluate his coaching performance this season, freshman defensive back Tamarion McDonald, and how COVID-19 has affected recruiting.

Here’s everything Pruitt had to say:

“We found out right before going out on the field yesterday that our game was canceled. We actually went ahead and worked on Texas A&M just to get another day of work in because we know at some point in time we will play them. Obviously, I would say our kids our disappointed, but I think our guys have done a really nice job so far being able to handle this COVID-19. After getting our test results back for the last two times this week, we have so far not had any positives. It’s something we have to focus on over the next four or five days with not having a game on Saturday, so we want to keep a routine as close as possible as it would normally be so we can get ready for Auburn next week.”

On what practice will look like the next couple of days:

“It’s going to be an opportunity for us over the next couple of days to sprinkle in some future opponents and really go back and get more fundamental-based practices like you would during a fall camp. We really have a lot of young guys on our roster that for whatever reason missed a lot of opportunities during fall camp. Just giving them an opportunity to continue to grow as players and understanding what it takes to be successful in this league is what our focus will be.”

On how the players are handling the uncertainty of not playing:

“It’s really kind of unique. When we first came back in June, the first month of June was not like a normal summer. We couldn’t do football activities in the month of June. Then we moved things back in July based off of our previous projections with the SEC, monitoring coming off the week of Fourth of July. This is not something unusual for them. It’s kind of happened with the season being moved back and changes on the schedule. We are adapting and worrying about the things we can control.”

How he would evaluate his coaching performance this season:

“It’s all based off your record right? Based off our record, it’s not where it needs to be. That’s pretty obvious.”

If coaches should be evaluated differently this season because of COVID:

“It’s really kind of unusual. The circumstances are really kind of the same for everybody, but at the same time, nobody knows what the circumstances are for everybody too. What goes on in Nashville compared to Knoxville, Tuscaloosa or Baton Rouge, obviously the circumstances have been different throughout the pandemic. And there is nothing you can really draw upon going into this season. No. 1, our first priority when we came back was the safety of our student-athletes. That is something we have really been focused on throughout this entire season, is trying to make sure we are COVID free and at the same time maintain some normalcy with the games and playing. Obviously, we want to win every game we participate in. We have not been able to do that, but our kids continue to work hard. We had a good day of practice yesterday. We all need to do better in our organization so we can be more productive on Saturdays.”

On the scrimmage at the end of Tuesday’s practice:

“We went like 40 plays with our younger players yesterday at the end of practice. It’s something we definitely will continue to do for the rest of this season.”

On freshman defensive back Tamarion McDonald:

“He had a very unusual circumstance. When he came in, we obviously found he had a previous injury to his shoulder. Based off at the time in June, not knowing if we would play, we definitely went ahead and did the surgery knowing he would probably miss four straight months. He’s come back and taken advantage of the opportunities presented to him. The next three days with us not having an opponent this week, just basic fundamentals of coverage is big for him because he missed out on all this stuff back during this summer and fall camp. He’s a guy that has size, speed and instincts, and he’s a smart kid. He’s going to continue to grow and develop to be a good player.”

On the adjustments once he learned the news of the Texas A&M game being postponed:

“Well, I talked to Jimbo (Fisher) on Monday about the circumstances around their team, and he was very open and honest about it so we knew it could possibly come to this. We went ahead and prepared just like we were going to play on Saturday. We got ready for a Tuesday practice. We adjusted. We found out right before practice started, so we kind of adjusted our schedule a little bit. We had a really good practice that was centered around Texas A&M. It would have probably been very similar to an off week practice where we worked three periods on an opponent and then worked three periods on ourselves.”

On how COVID-19 has affected recruiting:

“I think it’s difficult for the student-athletes to start with, just from their standpoint of not being able to take trips. When you go somewhere and you sit down, you get a really good feel for the people within a program, with the players, with everybody that is associated with the organization. I think it’s really tough on the seniors in high school. For us as coaches, the most difficult part is there are not as many teams playing football across the country so the evaluation process with no spring evaluation or summer camps and then the circumstances are obviously different all across the country. Some guys are actually playing but have had very little time to prepare. If you don’t have the opportunity to prepare, it’s hard to play at a high level. I’m sure there is probably frustration with the student-athletes. I know from a coaching staff, we have really tried to work hard to stay in constant communication and continue to grow and develop relationships.”