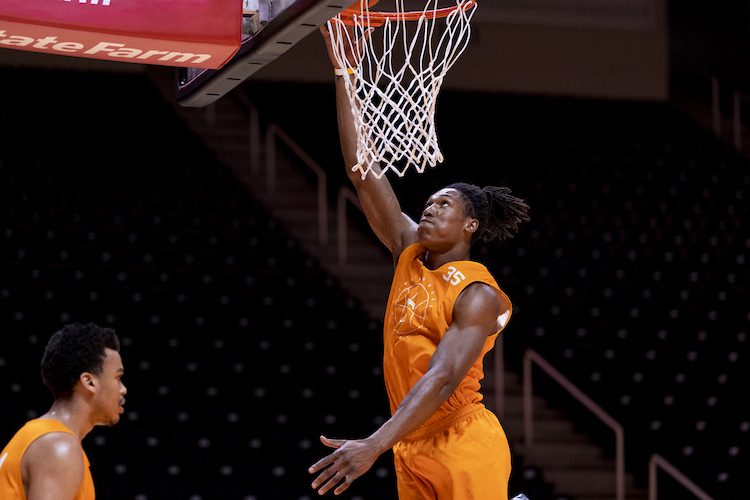 Pons was one of 50 players named to the list. He was one of six SEC players.

The reigning SEC Defensive Player of the Year announced on April 25 that he was declaring for the NBA Draft. He did not sign with an agent at the time in order to leave open the possibility of returning to school, which he ultimately decided to do on Aug. 3. Pons was one of 105 players invited to the NBA Draft Combine.

Pons enjoyed a breakout season in 2019-20 with the Vols. He went from averaging just 2.2 points and 1.8 rebounds while shooting 28 percent from three as a sophomore, to averaging 10.8 points and 5.4 rebounds while making 34.9 percent of his threes as a junior. He finished third on the team in scoring, rebounding and three-point shooting percentage.

The 6-foot-6 native from France tied a school record for most blocks in a season by accumulating 73 in 31 games. That mark tied CJ Black’s single-season mark, and Pons’ 2.36 blocks per game finished as the second-best average in a single season in school history, trailing only Black’s 2.52 per game in that same 1997-98 campaign.

Pons signed with Tennessee out of the INSEP (National Institute of Sport and Physical Education) Academy in Paris. He was considered one of the top-10 international prospects at the 2016 FIBA U17 World Championships in Zaragoza, Spain.

Tennessee is scheduled to begin its season on Nov. 25 against Charlotte as part of a three-team event it’ll host in Knoxville. The Vols will then play VCU on Nov. 27.