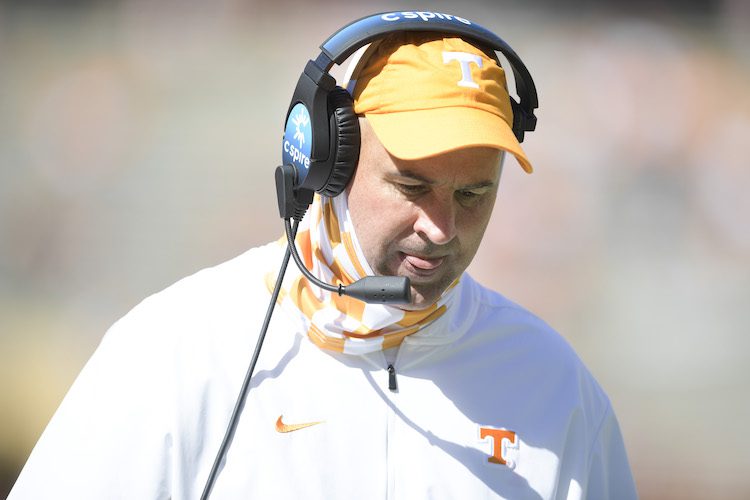 Questions about Jeremy Pruitt’s future as Tennessee’s head football coach have persisted through most of the season. Those questions have continued to intensify as the Vols get set to wrap up the regular season this week against No. 5 Texas A&M.

Tennessee snapped a six-game losing streak on Saturday with a 42-17 win over Vanderbilt, but the win didn’t do much to quite down the talk about Pruitt’s job status beyond next Saturday.

Auburn’s surprising decision to fire Gus Malzahn after eight seasons on The Plains and pay him a hefty buyout in the midst of a pandemic stoked the flames as well.

On Sunday, the rock on UT’s campus, a popular spot for students to paint messages on read “FIRE PRUITT SAVE UT FOOTBALL.” The message was painted over on Monday morning.

During his Monday presser, Pruitt was asked if he had received any assurances from Tennessee athletic director Phillip Fulmer that he would return for a fourth season as Tennessee’s head coach in 2021.

“Well we’ve been focusing on our — everyday at practice, the teams that we’re playing,” Pruitt said. “All of that stuff is always at the end of the season. We’ve just been working hard to be the best that we can possibly be.”

As of Monday, the SEC has three current head coaching vacancies following Malzahn’s dismissal,  South Carolina’s decision to fire Will Muschamp and Vanderbilt’s decision to move on from Derek Mason.

“It is unusual circumstances and nobody knows the circumstances around each individual job ,” Pruitt said. “I got a lot of respect for all three of those men. Coaching against them, getting to know them coaching in this league, I think they have done a phenomenal job at the places they have been.

“It’s really the rough part on this when there is a coaching change. Whether it is somebody leaving or somebody getting another opportunity, the people who suffer are the student athletes. You build the relationships, you recruit them to come to a certain school. I’ve had it both ways. I’ve been fired before and I’ve had opportunities before. The worst part of it is, in either scenario, the people that you have created relationships with and built a bond with come to a certain school-that’s the people that suffer in all of this.”

Whether or not Fulmer will make a decision on Pruitt following Saturday’s game is not known, although Fulmer showed public support for Pruitt during an appearance on Vols Calls back on Dec. 2.

Regardless, beating the a team who could potentially make the College Football Playoff in the Aggies at Neyland Stadium on Saturday could go a long way in securing Pruitt’s job for at least another season.

Kickoff between Tennessee and Texas A&M is set for noon on ESPN.