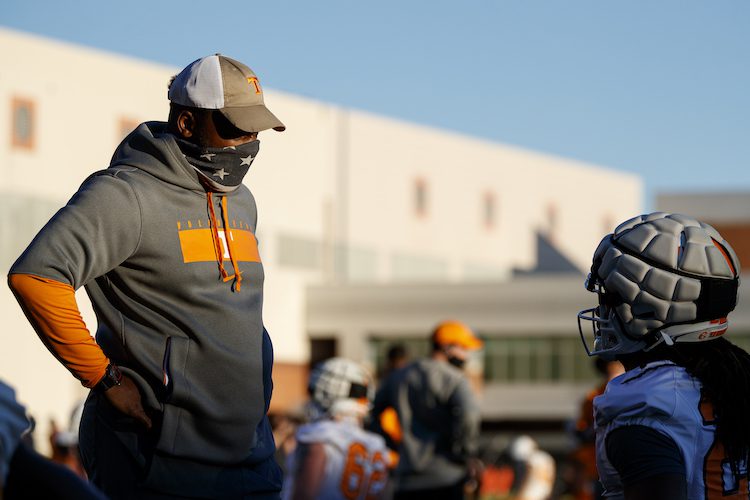 Tennessee will be without two assistant coaches against No. 5 Texas A&M on Saturday afternoon inside of Neyland Stadium.

Defensive coordinator Derrick Ansley and running backs coach Jay Graham will not be on the sideline against the Aggies due to COVID-19, according to a Saturday morning report from VolQuest.com.

Jeremy Pruitt will now call the defensive plays in the absence of Ansley in addition to his role as defensive line coach. It is unclear how Tennessee will replace Graham, who handles the running back rotation.

Tennessee will be looking to pull off the upset on Senior Day when the game kicks off. The Aggies have much to play for as they have an outside shot of making the College Football Playoffs if they can take care of business and prevent the Vols from playing spoiler. Texas A&M would also need No. 7 Florida to upset No. 1 Alabama in the SEC Championship Game in order to have a chance.

The Vols are coming off of a 42-17 win over Vanderbilt to snap a six-game losing streak. Harrison Bailey started at quarterback for UT and threw for 207 yards and two touchdowns in his second career start. JT Shrout also played quite a bit, throwing for 90 yards, two touchdowns and an interception.

Texas A&M beat Auburn 31-20 in its last game out. The Aggies were scheduled to play Ole Miss last weekend, but the game was cancelled due to COVID-19 issues within the Rebels’ program.

Kickoff between Tennessee and Texas A&M is scheduled for 12 p.m. ET on ESPN.