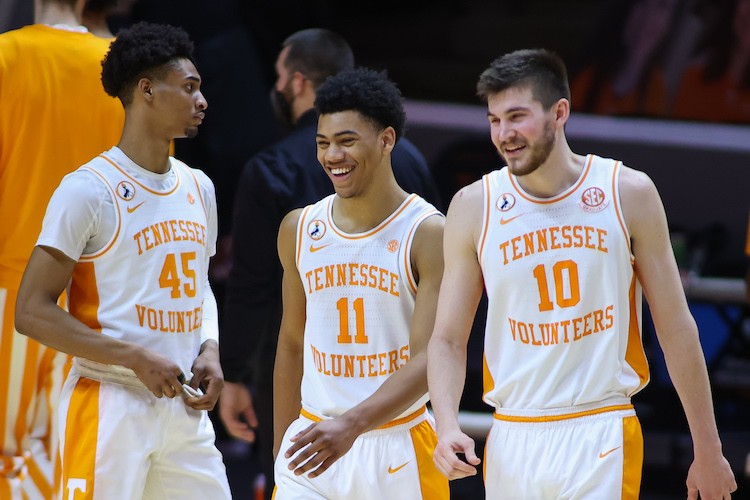 No. 16 Tennessee is back in action on Saturday afternoon down in Baton Rouge against LSU. Tipoff between the Vols and Tigers is scheduled for 2 p.m. ET on ESPN.

The Vols (14-4, 7-4 SEC) enter the contest coming off of back-to-back wins over Kentucky and Georgia. Freshmen Jaden Springer and Keon Johnson have led the charge in both wins. After the two combined for 50 points against the Wildcats last Saturday, Springer scored a career-high 30 points to beat the Bulldogs 89-81 on Wednesday night.

LSU (12-6, 7-4 SEC) is coming off of a 94-80 win over Mississippi State, but have won just two out of its last six games. The Tigers have received a majority of their scoring production from its starting five, with four of its primary starters averaging more than 12 points per game this season.

Tennessee leads the all-time series with LSU, 65-48, dating to 1933. The series is tied, 26-26, when the game is played in Baton Rouge. The Vols had won five straight at the PMAC before falling in each of its last two visits

A win for the Vols would snap their two-game losing streak in Baton Rouge and preserve their winning record on the road this season.

Managing editor Ben McKee, as well as RTI contributor Blake Von Hagen, make their predictions for Saturday’s game between the Vols and Tigers:

Saturday’s trip to LSU will be Tennessee’s toughest test of the season defensively. The Vols still possess one of the best defenses in the country, ranking 10th in the NCAA in scoring defense, allowing just 60.8 points per game. According to KenPom, the Vols ranks second in the NCAA in adjusted defensive efficiency, allowing only 86.6 points per 100 possessions.

LSU’s offense ranks sixth in the country in offensive efficiency, scoring 82.2 points per game. The Tigers are putrid on defense, however, ranking 146th in adjusted defensive efficiency. Tennessee has a golden opportunity to score north of 80 points for a third consecutive game.

There’s no doubt the Vols will be able to score against the Tigers. If they don’t, shame on them, because everybody has scored against LSU. Will Wade’s bunch especially struggles to protect the rim, which given the recent effort of Springer and Johnson to attack the rim, should make Vol fans feel good.

The matchup between Tennessee’s defense and LSU’s offense will determine this game. I’m giving the Vols the slight edge, though I recognize this is likely the toughest test for them because the Tigers don’t really have a flaw offensively. Because LSU’s defense is so horrific, Tennessee’s offense won’t have an issue putting up points and it’ll get just enough defensive stops to pull out a win.

Springer and Johnson will lead the charge once again on Saturday. They’ve completely changed the trajectory of this team’s potential and season with their play over the last week and it doesn’t appear to be false hope. LSU can’t defend the rim and the five-star freshmen both get to the rim better than anything else they do. Springer and Johnson both go for 20.

Tennessee will go on the road to face a young, tall and athletic team for the second Saturday in a row. Last week, the Vols got past Kentucky with a big second half. They will be looking for a faster start on Saturday in Baton Rouge. LSU is No. 6 in KenPom’s adjusted offensive efficiency ratings, so Tennessee’s second-ranked defense will have to come to play. The Tigers’ struggles this season have generally come against other teams that match their athleticism—Alabama (twice), Kentucky, Texas Tech and Florida.

If Tennessee continues to push the pace like it did in the second half in Lexington and for much of Wednesday’s game against Georgia, it can take care of business on Saturday. However, if the Vols fall back into the slow, struggling offense in the half-court…LSU might find itself up by double digits. As I predicted on Wednesday, I think Rick Barnes lets Keon Johnson and Jaden Springer go to work in transition. The Vols are too talented to be throwing up bad shots with a few seconds left on the shot clock. LSU is going to be another tough road game, but I like the adjustments Tennessee has made over the last 1.5 games.

Springer has poured in 53 combined points over his last two games. There’s no reason to expect a huge drop-off as the season progresses—especially if Tennessee keeps pushing the tempo.