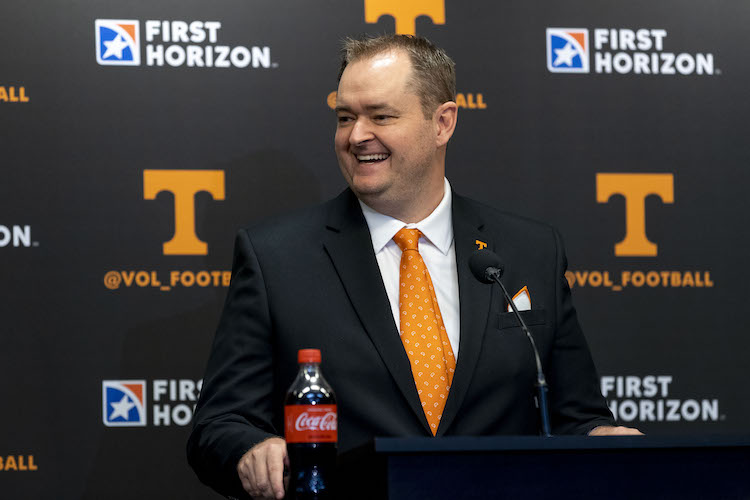 “We look forward to bringing an exciting brand of uptempo offense to Rocky Top,” Heupel said. “I am thrilled about the offensive staff we have assembled. They understand what it takes to maximize our potential offensively and will give our student-athletes the proper path to success and development on and off the field. Their energy will be infectious with our current players and in recruiting as well.”

Burns, who begins his seventh season as an SEC assistant coach, comes to Knoxville after spending the last five seasons as Auburn’s co-offensive coordinator and wide receivers coach from 2016-18 and taking on the role of passing game coordinator from 2019-20.

Elarbee returns to the SEC after stops at LSU and Missouri. Under Elarbee’s direction from 2018-20, UCF’s offensive line flourished and paved the way for a rushing attack that ranked in the top 25 nationally and top three in the American Athletic Conference all three seasons.

Golesh enters his 18th season at the collegiate level and spent the 2020 season on Heupel’s staff as co-offensive coordinator and tight ends coach. Prior to that, Golesh enjoyed four successful seasons as the tight ends coach and recruiting coordinator at Iowa State from 2016-19.

Halzle, a three-time Big 12 Conference champion quarterback at Oklahoma, begins his 13th season alongside Heupel. He spent two seasons at UCF, including the 2020 campaign as quarterbacks coach. The two have been instrumental together in elite quarterback development for 10 seasons. As a player, Halzle was part of a skilled quarterback room that included Sam Bradford, who captured the 2008 Heisman Trophy in his final season.

Mack, a Memphis native, owns 17 years of collegiate coaching experience and five conference championships. He was a three-time HBCU Coach of the Year at North Carolina Central. Mack served as the offensive coordinator at Rice the past three seasons.