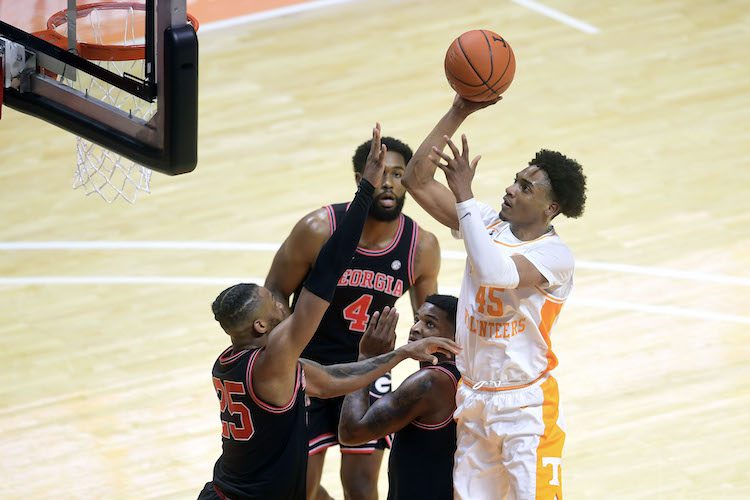 Each Monday we recap the previous week’s news and notes from around Tennessee Athletics. This is the place for Vol fans to catch up on any of the action they may have missed. Last week on Rocky Top, the men’s and women’s basketball teams had a rather rough week, while the football team made several key staff hires. We begin with the football program.

Tennessee head football coach Josh Heupel brought Rodney Garner aboard last week to be the Vols’ defensive line coach. Heupel has still not hired a defensive coordinator, but Garner is an SEC stalwart who played in the conference at Auburn and coached in the conference for decades. Garner previously had successful coaching stops at Auburn, Georgia, and even at Tennessee for two years in the late 90’s. He’s an ace recruiter, which will help coach Heupel as he tries to take on the monumental task of recruiting competitively in the SEC.

Tennessee squared off against two conference foes last week, first playing Georgia in Knoxville on Wednesday night. Tennessee was without senior forward Yves Pons, as he rested a lingering knee injury. The Vols started off hot as they showed off a new up-tempo style of play. UT jumped out to a 44-26 halftime lead due to its newfound tempo and it kept that lead for most of the second half.

However, in the closing minutes, the Vols got sloppy with the basketball and Georgia was able to cut into the lead as the game reached its final moments. Time would run out on the Dawgs and Tennessee escaped the game with an 89-81 win. Freshman Jaden Springer led the Vols with a game-high 30 points on 9-of-11 shooting, while teammate Santiago Vescovi scored 19 and Josiah-Jordan James netted 18.

On Saturday, the Vols traveled to Baton Rouge to face LSU. Pons was back in the lineup for what many hoped would be a competitive game. However, Tennessee’s offense struggled mightily in the first half, mustering only 26 points on 29% shooting. The Tigers did not fare much better, and the Vols only trailed by five at halftime.

The offensive woes continued to hamper Tennessee in the second half, and LSU began to separate from the Vols. LSU’s lead ballooned to as many as 17 points in the second half, and UT could not regain their footing. The Vols fell 65-78. Springer again led the Vols in scoring with 21 points, while Vescovi had 13. UT held the lead in the contest for only 32 seconds. Tennessee now holds a 14-5 record on the season and is 7-5 in conference play.

The Lady Vols took two road trips this week as they tried find their footing following a lengthy layoff due to COVID-19. Tennessee traveled to take on Kentucky on Thursday without its leading scorer, Rennia Davis, and the Cats were all over the Lady Vols in the first half.

The Lady Vols trailed 37-26 at halftime, but they flipped the script in the third quarter. Tennessee held Kentucky to nine points in the third and managed to take a one-point lead into the fourth frame. UT ran out of gas without Davis in the fourth and it would go on to lose 71-56. Junior guard Rae Burrell led the Lady Vols with 22 points, and Jordan Horston added 11 to the effort.

Tennessee traveled to College Station to take on No. 6 Texas A&M on Sunday in a game that was back-and-forth for 40 minutes. The game was tied 32-all at the half before the teams traded the lead for the entirety of the third quarter. UT battled the Aggies for 38 minutes but could not put together the stops they needed in the final two minutes. Tennessee lost 80-70.

Davis, who was back with the team for the trip after sitting out against Kentucky due to COVID protocol, led Tennessee with 25 points. Burrell had 18 while sophomore Tamari Key recorded a double-double with 10 points and 10 rebounds. The Lady Vols are now 12-5 on the season and 6-3 in conference play.