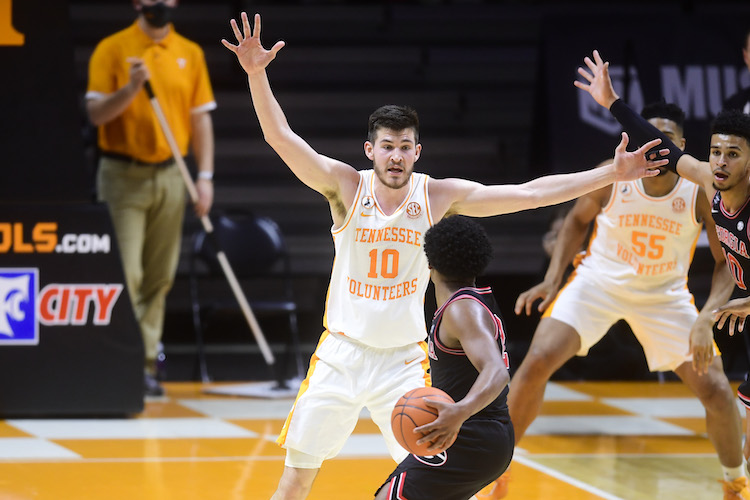 No. 19 Tennessee will be happy to return home for two home games after suffering another road loss.

The Vols have gone 11-2 in their last 13 home games, but they have lost three of their last four away from Thompson-Boling Arena. Their most recent setback was a 78-65 loss at LSU on Saturday.

The Tigers held Tennessee to a 35.5 percent shooting effort. They also only allowed six made field goals over the final 12 minutes and knocked down 17 of their 18 free throw attempts.

“It just felt like we were fighting uphill all game long because of some breakdowns that we haven’t had as often as you might think, and our one-on-one defense—they hurt us at the point position where they were able to break us down on some straight-line drives,” Tennessee head coach Rick Barnes said Monday.

Tennessee will try to get back on track when it hosts South Carolina on Tuesday night. The Vols have dominated the series of late, winning five of the last six and 15 of the last 17 at home.

The Gamecocks have lost three straight after pulling off a road upset at Florida. They nearly knocked off Alabama last Tuesday, but the effort fell just short in an 81-78 final. Ole Miss notched an 81-74 victory when the two teams met on Saturday.

“Anytime you go up against this team (South Carolina), it is going to be a hard-fought basketball game, because they are going to compete at every level,” Barnes said. “They are going to play every possession as if it matters.”

South Carolina coach Frank Martin’s teams have been known for wearing its opponent’s down defensively. This year has been a different style, though.

The Gamecocks still force a lot of turnovers (No. 20 nationally), but they are also playing up-tempo offensively. They enter Tuesday’s game at No. 19 in average possession length.

Junior guard AJ Lawson and junior forward Keyshawn Bryant are two of the most athletic players in the SEC, so Martin has adjusted his team’s style to suit his stars.

Tennessee has had its ups and downs against athletic teams this season. The Vols were able to come back against Kentucky at Rupp Arena, but they also lost to Alabama and LSU.

They have dropped to No. 3 in KenPom’s adjusted defensive efficiency ratings after Saturday’s loss. South Carolina likes to get out in transition, but it is outside the top 250 in effective field goal percentage.

Tennessee freshmen guards Jaden Springer and Keon Johnson will have a chance to match Lawson and Bryant in the open court. Barnes is more concerned about the play of his veterans, though.

“We haven’t played to the ability that I think we can, and for that to happen we need our guys who have been through it longer to be more consistent,” Barnes said. “…We definitely need Yves (Pons) and John Fulkerson and V.J. Bailey. We need those guys playing at the level that we know they’re capable of.”

Fulkerson came off the bench during Saturday’s loss in Baton Rouge. He had four points and five rebounds in 34 minutes of action. Pons had three points and Bailey Jr. was held scoreless on three shots.

Fulkerson has not scored in double figures since Jan. 30, when he had 11 points against Kansas.

“He’ll be fine,” Barnes said. “We’ll keep figuring out what we want to do with the lineup. I don’t think it matters. I told you guys that before. We still need seven or eight guys playing at a very high level and playing 20+ minutes for this team to be what we need it to be.”

Wednesday’s game will start at 9 p.m. ET on SEC Network.