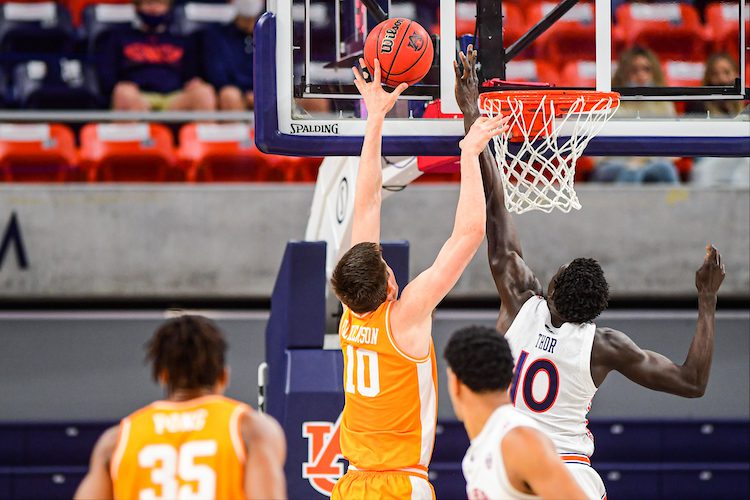 Each Monday we recap the previous week’s news and notes from around Tennessee Athletics. This is the place for Vol fans to catch up on any of the action they may have missed. Last week on Rocky Top, the men’s basketball team had another rough week, while the Lady Vols had a great week.

The Vols traveled to Nashville on Wednesday to take on in-state rival Vanderbilt, and UT struggled early. Tennessee’s offense has been disjointed for a month now, and unfortunately Wednesday night‘s contest was no different. Points were difficult to come by in the first half as Tennessee battled an inferior Vanderbilt team that was missing their two best players.

Tennessee trailed 20-17 with 6:44 to go in the first half before going on a 15-2 run to end the frame, securing 32-22 halftime advantage. UT pushed its lead to as many as 17 before Vandy began to slowly reel the Vols in as the game wore on. The lead had been whittled down to four points with 4:28 left in the game, before Jaden Springer and Keon Johnson pushed the lead back to double-digits in the final minutes. The Vols left Nashville with a 70-58 victory. Victor Bailey Jr. continued his hot 3-point shooting and led the Vols in scoring with 21 points, while Springer scored 20 points on 5-for-8 shooting.

On Saturday, Tennessee traveled to the Plains to take on an Auburn team that had lost six out of their last seven games, but who had beaten the Vols five games in a row. Tennessee’s offense struggled once again, as the two teams traded the lead back and forth in the first half.

Auburn scratched out a 34-30 lead by halftime, and the Vols could never really gain any offensive traction in the second half. UT did manage to tie the game at 43 with 12:43 remaining in the game, but they could not take the lead. Tennessee’s offense continued to sputter down the stretch, and Auburn was able to stretch its lead to 12 points with 1:55 remaining. That mountain proved too large to climb and the Vols lost 77-72. Tennessee’s freshmen did their part as Keon Johnson led the team with 23 points, while Springer tallied 20. Yves Pons managed 10 points, but no one else on the Vols’ roster was able to lend a hand. Tennessee is now 16-7 on the year.

The Lady Vols wrapped up their regular season this week, first by traveling to Missouri. Tennessee led the Tigers early in the first quarter, but the Tigers battled back to take a one-point lead going into the second quarter. The teams kept pace with one another throughout the second quarter, and Mizzou took a 36-34 lead into halftime. The Lady Vols continued to trail in the second half, ending the third quarter with a five-point deficit. Rennia Davis took over in the fourth quarter and carried the Lady Vols to a 78-73 victory. Davis scored every point except for three for the Lady Vols in the fourth quarter, while they held the Tigers to 13 points in the fourth frame. Davis poured in a game-high 26 points, while Rae Burrell scored 23 in the win.

Tennessee then welcomed Auburn to Thompson-Boling Arena for a senior day finale on Sunday. Auburn never stood a chance. The Lady Vols held the Tigers to eight points in the first quarter and never looked back. UT led by double-digits at halftime, and put its foot on the gas in the second half on its way to an 88-54 win over Auburn. Two seniors led the Lady Vols with Davis recording yet another double-double with 23 points and 11 rebounds, and Kasi Kushkituah who scored a career-high 19 points. Sophomore Tamari Key also racked up a double-double with 10 points and 10 rebounds.

The Vols started their week off with two resounding wins over Arkansas-Pine Bluff, beating the Golden Lions 21-1 and 14-6 in their match-ups.

Tennessee then defeated Indiana State 4-3 on Friday before stumbling during the weekend. Indiana State got the best of the Vols twice on Saturday, beating them 3-1 and 7-5 in a doubleheader. In their two losses, the Vols went a combined 4-for-17 with runners in scoring position. They had a chance to bounce back from their first losses of the season with a fourth game against Indiana State on Sunday afternoon.

UT started the game out strong and took a 5-0 lead in the fifth inning, but it coughed up the lead in the top of the eighth as the Sycamores rallied to tie the game at five apiece. The teams could not come up with any runs in the ninth inning so the game went into extras and stretched it to the 11th inning. In the bottom of the 11th, Vol first baseman Luc Lipcius was able to cross home plate after an errant throw home by the Sycamores third baseman. This led to a series tie for the Vols who are now 7-2 on the season.

The Lady Vols had a busy week on the diamond, first sweeping Ohio University in a double-header on Monday before knocking off Illinois State on Wednesday. Tennessee then beat UT-Martin 10-1 in five innings on Thursday before sweeping Central Michigan in a two-game series on Saturday and Sunday. The Lady Vols then thumped Northern Kentucky on Sunday afternoon 8-0 in five innings thanks to junior Samantha Bender who pitched a no-hitter. It was the program’s 50th no-hitter and the first one since 2016. The Lady Vols improved to 12-1 on the year thanks to their victories.

Tennessee basketball will take on Florida in Knoxville in their regular season finale on Sunday at 12 p.m. ET.

The Lady Vols will gear up for the SEC Tournament and as the No. 3 seed they will await the winner of the game between the No. 6 seed and No. 11 seed on Friday night.

The baseball Vols have a single-game match up with Dayton on Wednesday and a three-game series against Georgia State lined up for the weekend.

Tennessee softball will travel to College Station, Texas next Friday to take part in the Reveille Classic. The Lady Vols will face Campbell University, Lamar University, and Texas A&M over the course of the weekend.