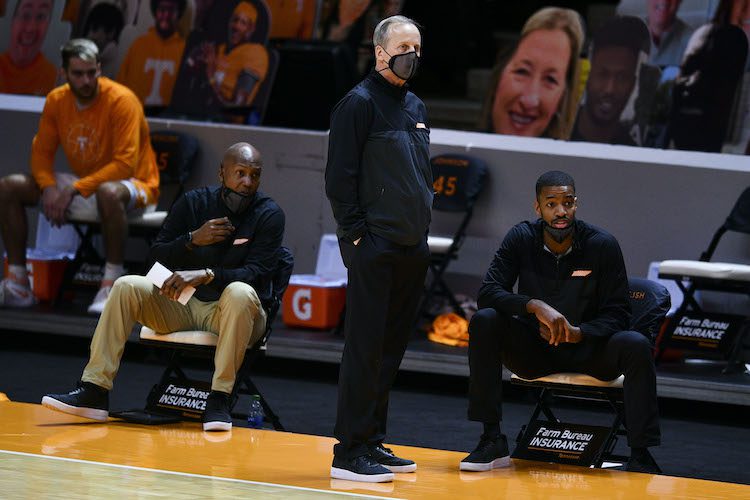 Tennessee assistant basketball coach Kim English is the leading-candidate to become the next head basketball coach at George Mason, sources confirmed to Rocky Top Insider on Friday night. John Brice of Football Scoop was the first to report the news following Tennessee’s loss to Oregon State in the opening round of the NCAA Tournament.

In 2018-19, English helped Tyler Bey and McKinley Wright IV earn first-team All-Pac-12 honors. Bey also was named Pac-12 Most Improved Player after leading the Buffaloes with 13.6 points and 9.9 rebounds and logging 17 double-doubles. In English’s first season at Colorado, he coached All-Pac-12 honoree George King, who was selected by the Phoenix Suns in the 2018 NBA Draft.

From 2015-17, English worked for two years under Frank Haith at Tulsa—earning a promotion to assistant coach after one season as director of player development. During that time, he helped mentor a pair of All-American Athletic Conference selections, and the Golden Hurricane earned a bid to the 2016 NCAA Tournament.

A four-year letterman under coaches Mike Anderson and Haith at Missouri from 2008-12, English scored more than 1,500 points and averaged 11.0 points, 3.0 rebounds, 1.4 assists and 1.1 steals per game for the Tigers. He earned third-team All-Big 12 honors in 2010 and 2012, and Missouri won 107 games during his four-year career, making him and two teammates the winningest players in program history.

The Tigers won a school-record 31 games while making a run to the 2009 Elite Eight in English’s freshman campaign. He averaged a career-best 14.5 points as a senior in 2011-12 and ranked fifth in the Big 12 with 78 3-point makes, while leading Missouri to 30 wins, one of two Big 12 Tournament titles during his career and a No. 2 seed in the NCAA Tournament. He was named Most Outstanding Player of the 2012 Big 12 Tournament after averaging 23.0 points and shooting 78 percent during the Tigers’ championship run.

He then spent two years playing professionally overseas and had a brief stint with the Chicago Bulls in 2014.