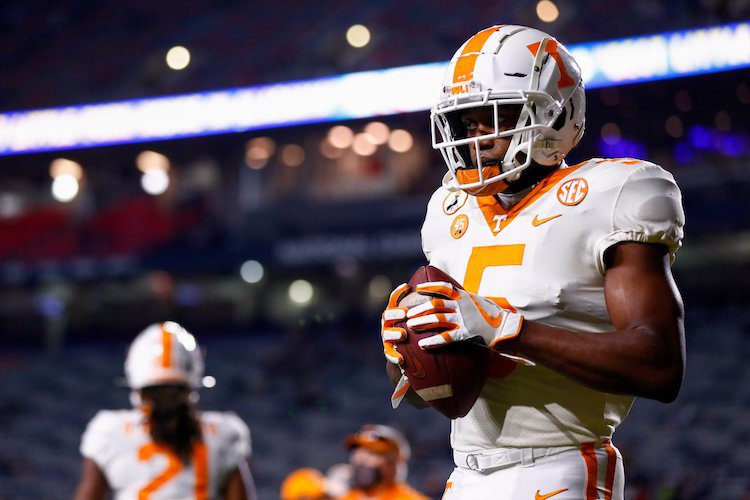 Tennessee is scheduled to host its annual Pro Day inside of the Anderson Training Center on Thursday morning in front of numerous NFL personnel ahead of next month’s NFL Draft. Trey Smith, Bryce Thompson, Josh Palmer and Brandon Kennedy are the four Vols participating this season.

All four spoke with the media on Wednesday morning to discuss what all they would like to accomplish during their pro day, as well as what the NFL Draft process has looked like for them.

Smith was the first to speak and discussed what position along the offensive line teams are talking to him about, on his workouts leading up to the NFL Draft, playing in the Senior Bowl, feedback from NFL teams, what he will bring to an NFL team and much more. Here’s what Smith had to say:

Palmer spoke second and also discussed what position at receiver teams have spoken to him about, his time at the Senior Bowl, the draft process, what NFL teams have said they like about his game, reaching out to Jauan Jennings and Marquez Callaway during the process and much more. Here’s what Palmer had to say:

Thompson discussed his decision to declare for the NFL Draft a year early, what position in the secondary teams have talked to him about, what NFL teams like about his game and what he wants to accomplish during Pro Day. Here’s what Thompson had to say:

Kennedy was the last to speak and discussed what he wanted to show scouts, where he’s been training, working at guard and center, what his draft process looks like and much more. Here’s what Kennedy had to say: