There was a decent chance that Tennessee’s spring game wouldn’t happen on Saturday, due to the bad weather around Knoxville. Thanks to some luck, the Vols were able to get in all four quarters on the day.

The Vols took the field in their orange and white jerseys, with the QB’s rocking the “Smokey Gray”. The Vols were missing some key players, as Elijah Simmons, Greg Emerson, Roman Harrison, Byron Young, LaTrell Bumphus and a few others didn’t participate.

Tennessee was led at QB by Hendon Hooker, Harrison Bailey and Brian Maurer, who all had touchdowns today. Look, this wasn’t a matchup against a top defense, as the Vols struggled to find momentum from the front seven. That was to be expected, as the Vols defensive line is a work in progress. Also, the linebacker group consisted of Solon Page, Morven Joseph, Will Albright and Pakk Garland, as Jeremy Banks and Roman Harrison were absent, still recovering from off-season procedures. 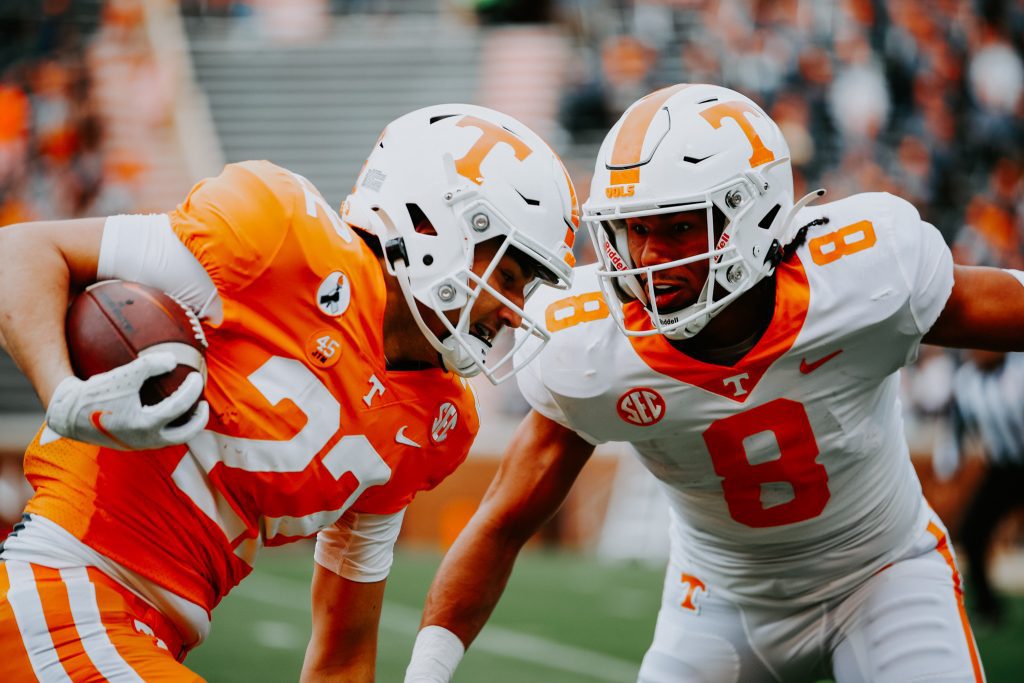 As the Vols worked the ball downfield, the group of receivers who stood out were your regulars, along with one surprise. Jack Jancek finished the game with 2 receptions for 137 yards and a touchdown. As for the other, Cedric Tillman had 5 receptions for 67 yards and 1 touchdown. As the clock hit zero, Hooker connected with Tillman for a beautiful catch in the end zone.

Harrison Bailey finished the game 12-15 for 260 yards and two touchdowns. He looked poised in the pocket, even though there wasn’t much of a push from the front seven. As for Hooker, he finished 10-14 for 111 yards and 1 touchdown, but also threw a pick-6 to Warren Burrell. Brian Maurer finished the game 9-15 for 171 yards and 1 touchdown. Both Hooker and Maurer had their moments outside the pocket, with Hooker scrambling for a touchdown.

Harrison Bailey was the best looking quarterback of the day, he looked comfortable and hit most of his targets in stride, especially down the field. 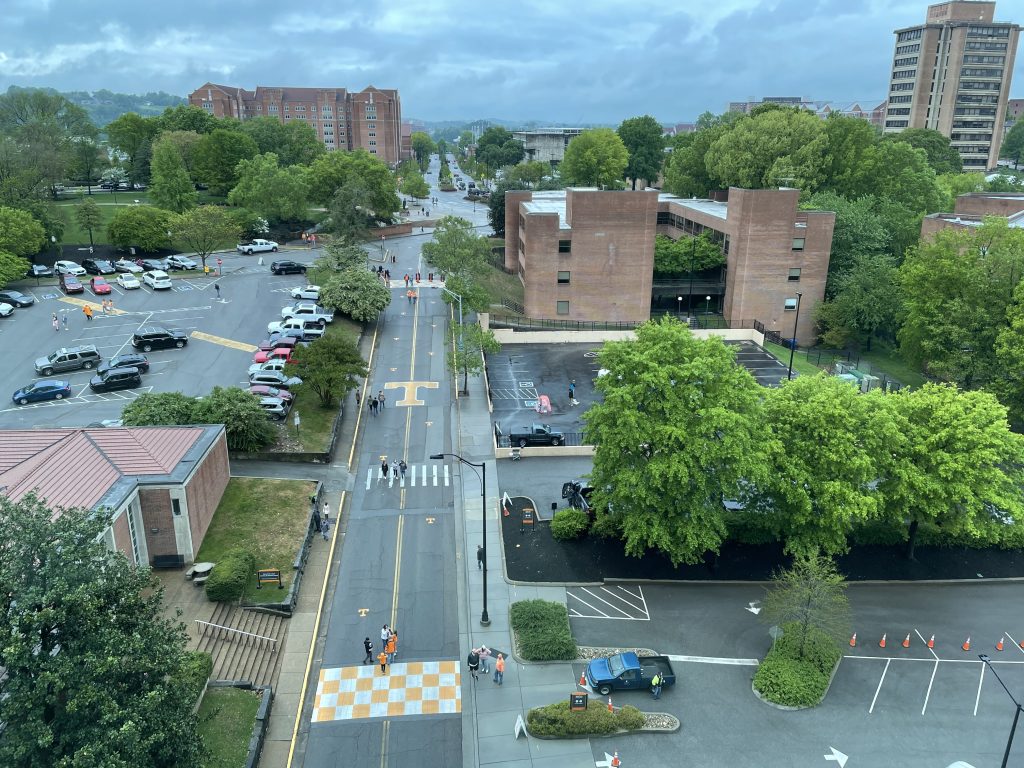 The Vols rushing attack will only get better, as they have a stable of backs they can depend on. Today, it was Jabari Small, Fred Orr, Marcus Pierce and Jaylen Wright who stood out, especially with their ability to hit the gap and make defenders miss. Dee Beckwith didn’t have as many carries as I would’ve projected coming into the day, though he was targeted a few times out of the backfield. He will be looked upon to help the Vols offense in multiple ways this Fall.

The defensive line will be a point of emphasis over the summer, as they will need to add depth, as mentioned by Josh Heupel during the postgame press conference. As the Vols move into the off-season, the group will need more than 2-3 players leading the way, they have to build up a core group of guys who want to put in the work. The group was without Darel Middleton and Aubrey Solomon on Saturday, which Heupel didn’t really address postgame.

The offense gave Tennessee fans hope for the future, though it wasn’t perfect and didn’t need to be, even though they finished with over 800 yards. This is about learning how to maintain drives and focus on getting the ball down the field, especially working the boundaries. How players step up over the next 4 months will define the 2021 season for Tennessee, they need the secondary to continue growing and lead the way. The linebacker group will work itself out, one way or the other. I’d expect the Vols to search the portal for help. 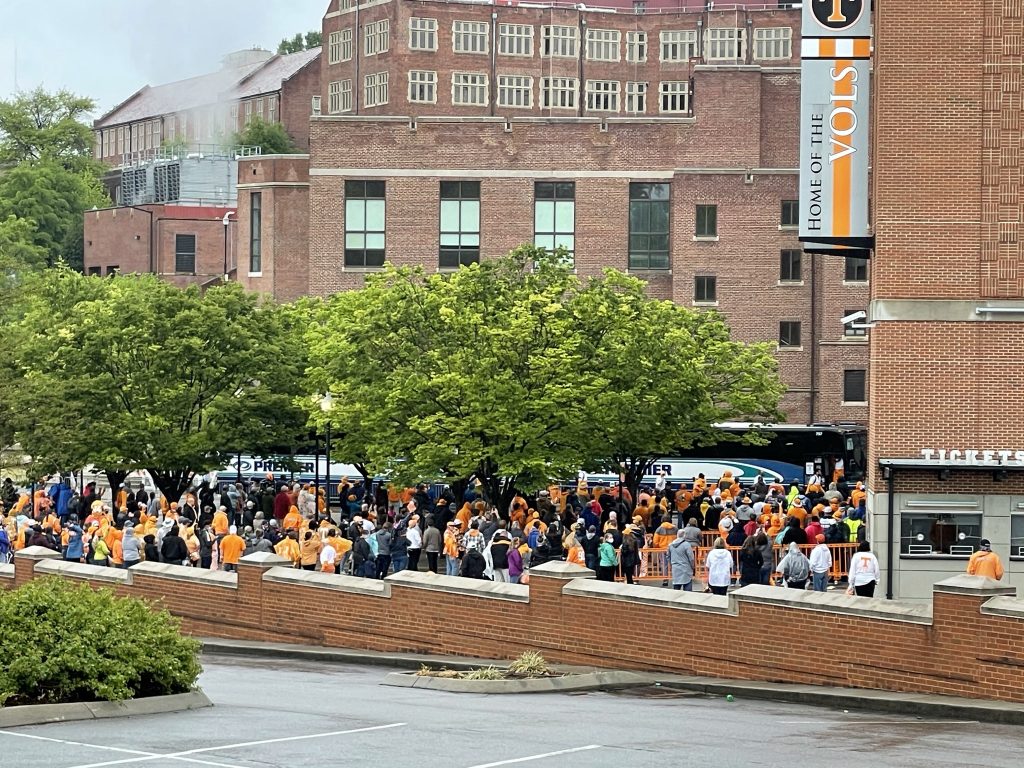 Tennessee finished with over 800 yards of total offense today between both groups, a lot of which can be attributed to the fast paced movement. It’s something fans haven’t seen a very long time around Knoxville. This group has the ability to get better, especially with a QB competition still wide open.

So, we move onto the summer session, where the Vols will look to continue their growth. There will be some attrition and addition, so don’t be surprised over the next few weeks. The coaching staff understands where this group needs to be better and will work to add those components. The transfer portal will be very active until August and the Vols should take every opportunity to be add players that can immediately contribute.

Today was a good start for Tennessee football and Josh Heupel. The players competed and actually looked  excited to be there, especially coming off a rough 2020. So as they continue to work over the summer, I would expect to see a difference in this group come August.