The Josh Heupel era for Tennessee football has a new opening date. The Vols were originally scheduled to open the season on September 4th, but that has changed, as they will now play on Thursday, September 2nd. It will be under the lights, as kickoff is scheduled for 8pm ET against Bowling Green.

Tennessee Athletic Director Danny White had this to say on the movement.

“Any time you consider moving football games to a weekday—which is rare—you want to be sensitive to out-of-town fans who have to make plans to travel to Knoxville. In this case, the Labor Day holiday and four-month lead time should help in that regard. Sliding our opener to this Thursday primetime window gave us a wonderful opportunity for our football student-athletes to kick off their season in the national spotlight.”

“This should be a fun way to begin celebrating 100 years of Neyland Stadium while also beginning an exciting new era of Tennessee football under Josh Heupel. I cannot wait to feel the electricity as the Vols come bursting through that T on Thursday night.” 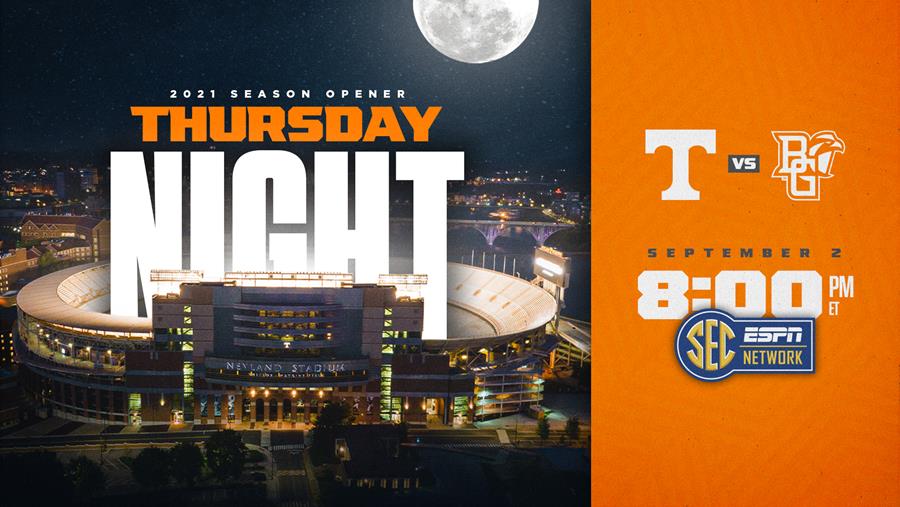 This move will put Tennessee in the national spotlight, a marketing strategy that Danny White is sure to use to his advantage. The Vols will take any kind of additional help when it comes to selling the program, and being on SEC Network to open the season will do that.

The last time Tennessee played on Thursday night was 2016, as they kicked off the season against Appalachian State, which turned out to be a highly contested matchup.

So, as Tennessee works to put together this offense, they know now that they’ll have a national spotlight on them as they open the season in September.

Bring on the craziness.