When Kansas defensive tackle Da’Jon Terry entered the transfer portal, Tennessee already knew they would be pursuing another player to help their needs up front. On Sunday, Terry committed to the Vols and instantly made the defensive line deeper and much more aggressive.

I spoke with Da’Jon Terry to discuss his journey to Knoxville and what fans can expect of him when he suits up for the Vols.

Hailing from Meridian, Mississippi, Da’Jon committed to Kansas in 2019, after Les Miles took over as head coach. He redshirted his first year in Lawrence, playing in only two games, while he worked on his upper body strength and shedding some of his weight.

Looked upon as one of the most important players for Kansas, as they prepared for the 2021 season, the former 2-star recruit made a huge impression during the 2020 season. Terry started two games and played in eight as a redshirt freshman for the Jayhawks last season, recording 14 tackles and 2 sacks. Turns out, he became such a huge contributor for his group, the Jayhawks were looking for him to be a leader on the defensive line in 2021 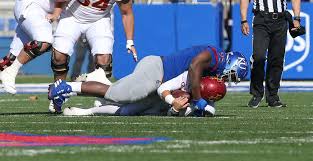 The Vols picked up a grown man on the defensive front, now it’s up to Rodney Garner to build him into the linemen Tennessee needs.