It was an electric atmosphere on Friday night in Knoxville, as Tennessee battled #1 Arkansas in front of sold-out crowd. Former Tennessee QB Peyton Manning threw out the first pitch tonight, getting the crowd into it before the first batter stepped up to the plate. 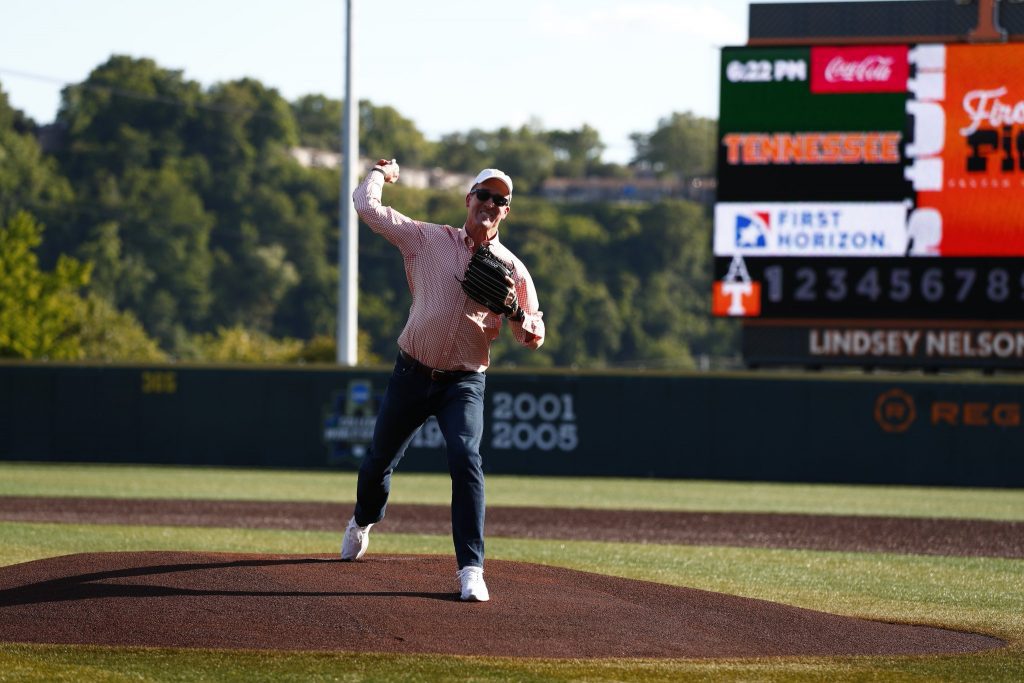 The Vols couldn’t have asked for a better start to the game, as they took a 5-0 lead in the first inning.

Jake Rucker got the Vols going with a 2-run double, as they took a 2-0 lead. It didn’t take long for them to add a few more, as Jordan Beck launched a 3-run homer to give Tennessee a 5-0 lead, heading into the 2nd inning. But unfortunately, that’s where the Vols scoring ended.

See ya, Jordan Beck with the 3-run homer.

As Chad Dallas battled against the Razorbacks, he gave up a 2-run homer in the 2nd inning to Robert Moore. The Razorbacks capitalized in the 3rd, making it 5-4, after a 2-run homer from Brady Slavens. As the Vols took to the plate in the bottom 3rd, it looked like they were setting themselves up for a few insurance runs. Unfortunately for Tennessee, they left the bases loaded and let Arkansas keep it tight.

The Razorbacks tied it up in the 5th inning, as Cayden Wallace roped an RBI single to left field. As the Vols continued struggled getting anything going at the plate, Arkansas did just enough to grab the lead in the 8th. Brady Slavens scored off a sac-fly from Robert Moore and the Razorbacks took the 6-5 lead, which would end up being the final score.

As the game continued going back and forth, Tony Vitello thought his team got a little “tight”, keeping it close for both teams. Sean Hunley came in the game during the 5th inning and proved why he’s so coveted by this coaching staff. He finished with 3 strikeouts and only gave up 1 hit, during his 4.2 innings of work.

The Vols and Razorbacks will do it again on Saturday at 12 ET, on the SECNetwork.