The Tennessee quarterback competition will heat up this summer as players have returned to campus and have now started their off-season workouts. The addition of Joe Milton should make things a bit more competitive, since Hendon Hooker, Brian Maurer and Harrison Bailey all went through spring practice.

It was announced on Tuesday that Harrison Bailey would be working with other top quarterbacks from around the country at the Manning Passing Academy. This years group of QB’s include Auburn’s Bo Nix, South Alabama’s Jake Bentley, Liberty’s Malik Willis and many more, including Tennessee’s week two opponent, Pittsburgh’s Kenny Pickett.

Many of Tennessee’s past quarterbacks have worked the camp, the last one being Jarrett Guarantano. The academy runs from July 15-18th, and takes place at Nicholls State University, in Thibodaux, LA.

Harrison Bailey has taken the break between spring and summer workouts to travel around the country and work with different coaches on his game. He was in the deep south of Alabama, working with the coaches at QB Country, before setting off to California to continue crafting his game.

QB Country, which is a company based out of Mobile, Alabama, has worked with countless high profile QB’s ever since they launched, years ago. Harrison Bailey is a frequent visitor to the facility and has continued to working with the coaches, including founder David Morris. 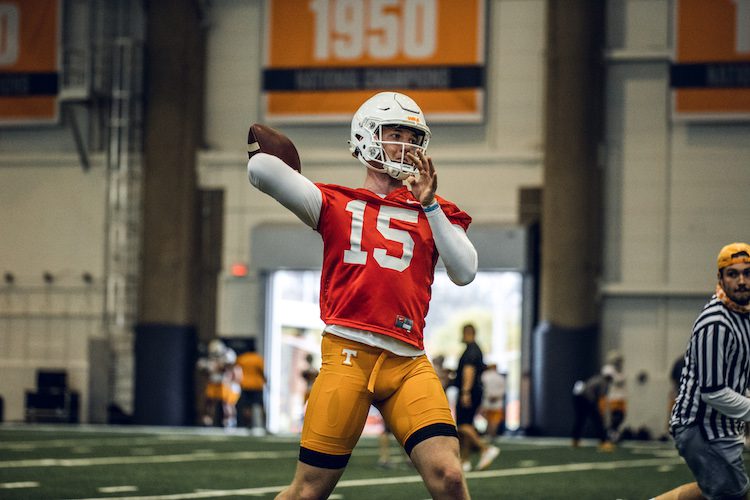 Bailey, who has worked in Mobile on numerous occasions, even putting in time with Velus Jones Jr., when he first committed to Tennessee, continues to craft his game. The Vols will be looking for Bailey to step up and fight for the starting job over the summer. Over the course of the last few weeks, Bailey has spent multiple days working with the coaches in Mobile and California.

Needless to say, the summer competition will be heated, as Tennessee looks to find their starting quarterback for 2021. I don’t expect this coaching staff to be as indecisive as the previous, they will find their guy, even if it takes all of fall camp.