Another raucous crowd greeted the Tennessee baseball team on Saturday night, as the Vols faced off against Liberty for a spot in the regional championship game. A game in which you had to wonder how Tennessee would respond, coming off the emotional win on Friday night. But, it didn’t take long to figure out the Vols were ready for the challenge.

Before Blade Tidwell could throw his first pitch tonight, the Vols were working to give him a lead. It was Laim Spence who got things started with fireworks, as he hit a rocket to right field, giving the Vols a 1-0 lead and setting up what would be a wild night of hitting for Tennessee.

As Blade Tidwell took care of business in the first three innings, it would be his teammates bats that came up big for him over the course of those innings. Honestly, you felt bad for the cars outside of the park for what was coming, as the Vols started their own edition of home run derby.

It was Luc Lipcius who went yard to start things off in the 2nd inning, hitting a rocket to right field, giving them a 2-0 lead. Not to be outdone by his teammate, Liam Spence was looking to add another HR to his stat sheet. Tennessee had two runners on, with two outs, as Spence got ahold of another hanging pitch, sending it over the left field wall, giving the Vols a 5-0 lead. The crowd was sent into a frenzy, as Spence rounded the bags, after hitting his 2nd homer of the night.

The five home runs through three innings was the most they’ve hit in an NCAA tournament game, breaking a record that was set against Stanford in the 1995 College World Series. 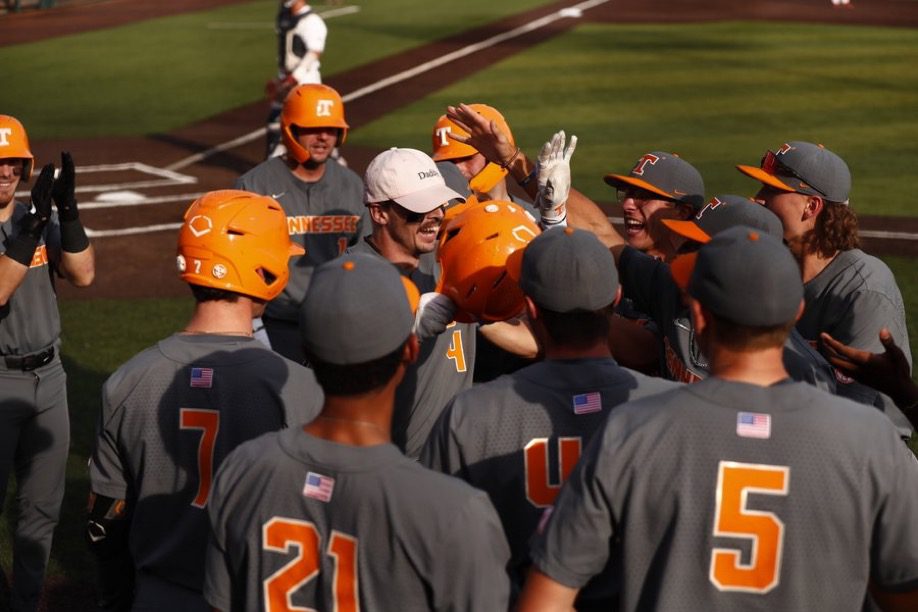 If you thought the Vols were done hitting dingers, you were mistaken. As they entered the 3rd inning, things were about to pick up, in a big way. After winning it for Tennessee the night before, Drew Gilbert hit the center field wall and rounded the bases one more time, for his 2nd homer in two days. The Vols led 6-0 and were looking to give Tidwell a little more insurance, as Luc Lipcius stepped up to the plate. With two outs on the board, Lipcius hit a bomb to center field that cleared the wall without any trouble, giving Tennessee a 7-0 lead, three innings into the game.

For the Vols pitching, Blade Tidwell had himself a nice night for the Vols, finishing with 106 total pitches, 3 K’s and only giving up 4 hits. He did end up giving up three runs, but part of that was due to some fielding problems, that didn’t help out the freshman. 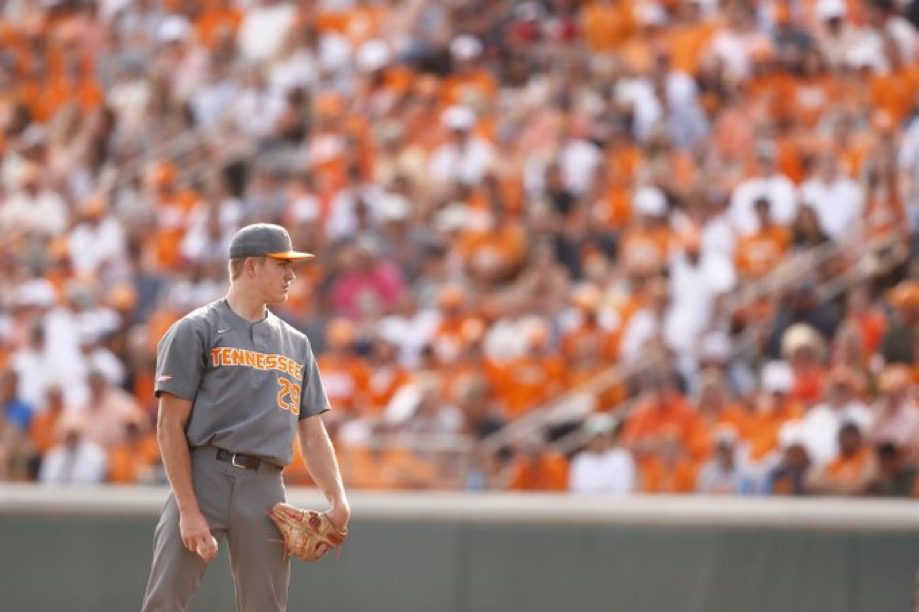 Talk about a quick dose of reality, the Vols offense busted out of the starting gates and were heading straight for the win column. But Liberty wouldn’t go down without at least making things interesting in the 6th inning. The Flames ended up putting 3 runs on the board in the 6th, as Jake Rucker was high on a throw to first with 2 outs, bringing the runner home. Liberty followed that up by scoring 2 more runs on a Jordan Beck fielding error in right field, bringing it to 7-3.

After Kirby Connell couldn’t get much going in the 7th inning, he was relieved by Camden Sewell, who gave Tennessee the juice they needed to close this one out. Sewell finished with 4 K’s, only giving up 2 hits, which the Vols fed off, especially coming down the stretch. Liberty had 2 runners on, with o outs in the 7th, as Sewell was looking to get his team out of the jam. After striking out the first batter he faced, Liberty grounded into a double play and Tennessee got out of the inning unscathed, to the roar of the Lindsey Nelson crowd.

If there was a point where the Tennessee fans got back into the game, after a little lag, that was it. It’s not hard to tell how much this team has fed off their fans, as Tony Vitello alluded to in his postgame press conference. Raucous would actually be an understatement, as this crowd has continued to play a big part in this regional.

After the explosion of runs in the early part of tonight’s game, the Vols were looking for some insurance in the 8th inning, which is exactly what they got. Drew Gilbert stole second after being walked and Luc Lipcius was also put on base, giving them an opportunity to extend the lead. Pete Derkay stepped up big, as he roped a 2-RBI single down the right field line, giving them a 9-3 lead. 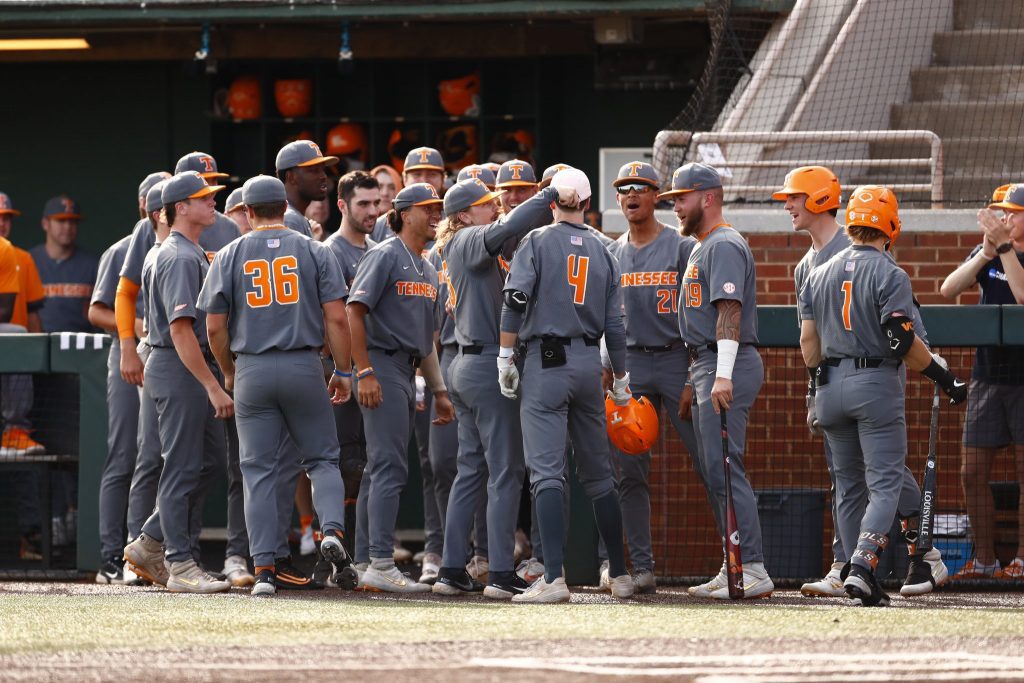 There’s not many scenarios in college baseball that Tennessee hasn’t been a part of this season, as Camden Sewell took the mound for the final time of the game. After retiring the first two batters, he gave up a single, which was only extending the game for another two minutes. As the crowd rose to their feet and fed the noise, Sewell struck out the final batter and sent Tennessee into the regional finals.

There wasn’t much Tennessee couldn’t do on Saturday night, which showed in the final box score. The Vols are on a mission, and after Friday nights crazy ending, tonight felt somewhat normal. This team continued to show why they’re special, especially finding so many different ways to win games. As Tony Vitello mentioned again tonight, they’re in a great spot when it comes to pitching arms and the their bats are hot, which is a great combo heading into Sunday.

The Vols find themselves in the perfect spot. Get the win on Sunday night and you take care of a regional that many thought was the toughest in the tournament.

If you though Lindsey Nelson Stadium was rocking these past two nights, I’d say you haven’t seen nothing yet. Sunday night has the makings of one crazy atmosphere, as Tennessee looks to continue on their road to Omaha.

Rick Barnes Is Headed Back To Austin, As Vols Will Play Longhorns