If you were looking for a heavyweight fight in Knoxville on Saturday night, LSU and Tennessee definitely delivered. The Vols were looking to grab game one of the series, behind the arm of Chad Dallas. The party was not only inside Lindsey Nelson Stadium, as a huge crowd packed the streets outside, for the watch party, put on by the university.

As the Vols took the field, Chad Dallas got the ball for his team, as Tony Vitello looked for the “Cheese” to carry them to a victory. It turned into a pitchers duel between both teams, as Ma’Khail Hilliard was throwing a great game for the Tigers, throwing 5 innings and recording six strikeouts. But, his performance was overshadowed by the performance of Dallas.

After Cade Doughty hit a rocket to right field in the 2nd inning, during a downpour,  giving LSU a 1-0 lead, Dallas seemed to calm down, before lightning struck. Before the Vols took the field for the 3rd inning, play was halted due to lightning, which delayed the game for 50 minutes. How Dallas would respond, coming off the break, would be key for Tennessee. It was almost like the delay ended up helping him, in some weird way.

Tennessee finally got on the board in the 3rd inning, thanks to some nice base running from Jordan Beck. On his very first pitch, with Beck at 3rd, Pavolony hit one to shortstop and getting the RBI, as Beck rushed home, tying things up. 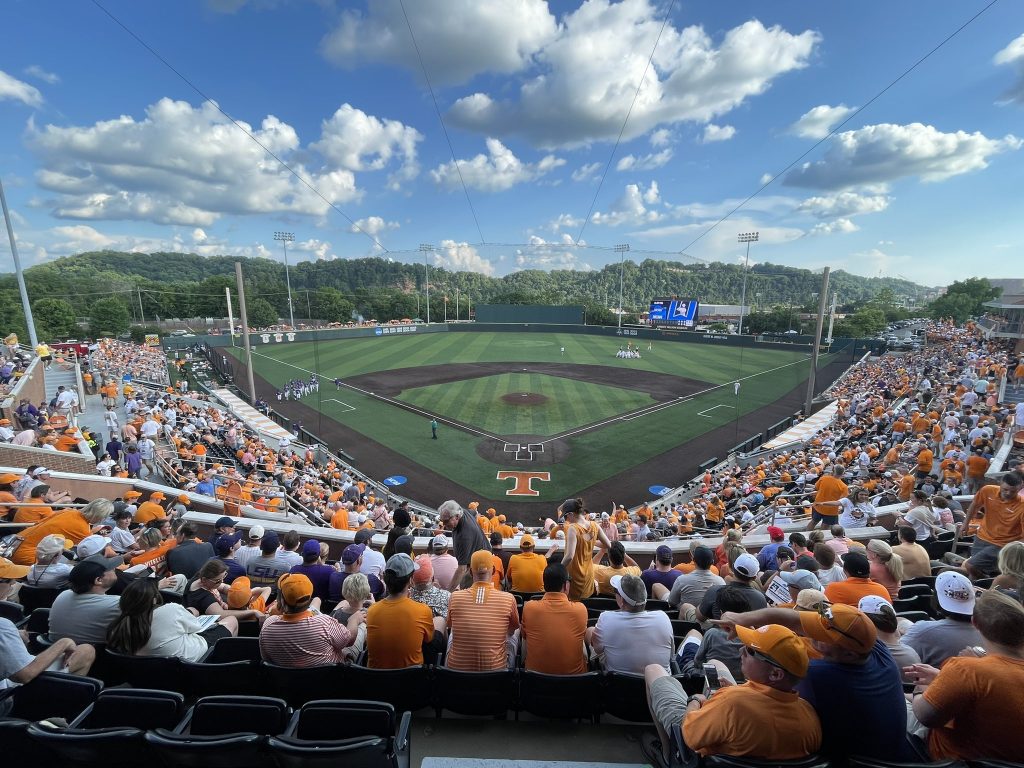 As Chad Dallas kept dealing for Tennessee, things got a little dicey in the 5th, after Drew Bianco stole 3rd, followed up by a wild throwing error from Connor Pavolony, giving LSU the 2-1 lead. After that play, Dallas went to another level. He told the coaches it was in his heart to finish the game, while waiting out the rain delay. He wasn’t coming out of that game and too the benefit of his teammates, as he wasn’t hurt by the wait.

This team thrives under pressure and seems to love the chaos, which was evident in the bottom 6th. After Max Ferguson was walked, putting a runner at first, Jake Rucker doubled down the right field line, putting runners at 2nd and 3rd. This was the moment Tennessee was waiting for, as Drew Gilbert hit into a fielders choice, allowing Ferguson to score and tying it up. But, the Vols weren’t finished, as Jake Rucker scored, off the Lipcius fielders choice. 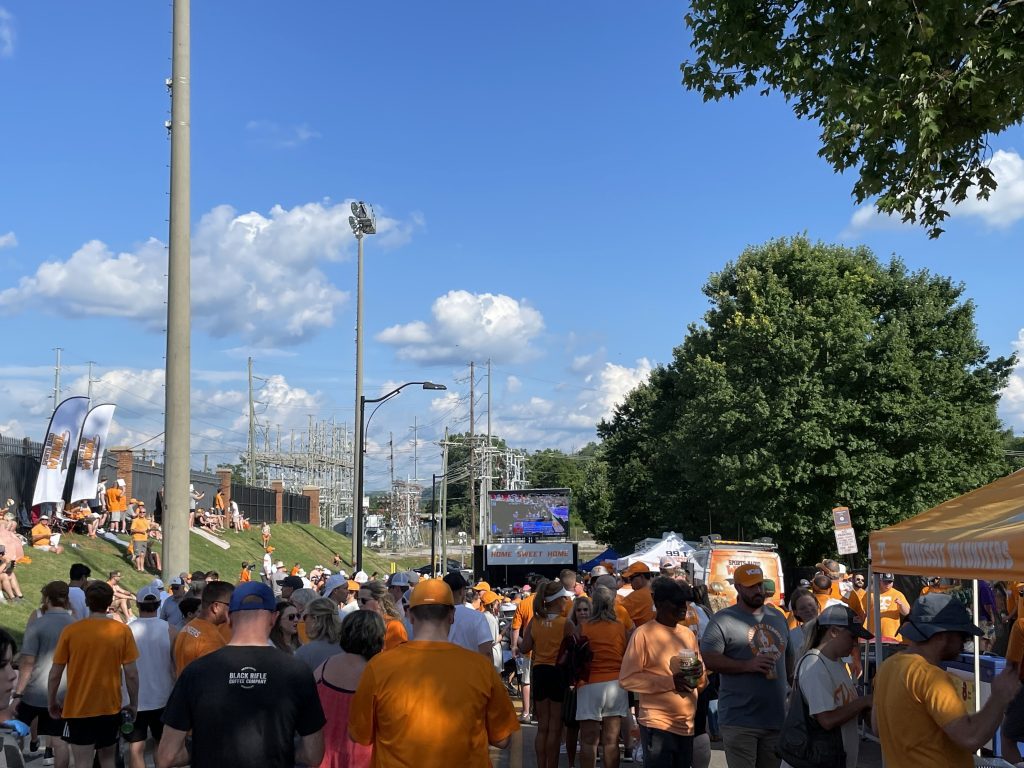 Just to make things a bit tougher for the Tigers, Jordan Beck roped an RBI-single to right field, giving the Vols a 4-2 lead, heading to the 7th inning. That inning could’ve come back to hurt the Vols, as they left the bases loaded, but the defense came up big in the back half.

The 6th inning was the last of the night for Chad Dallas, as Sean Hunley came in to relive him in the 7th. Talk about a special night for “Cheese”, as he finished with a career high 12 strikeouts, only giving up 5 hits and did not walk a batter in his six innings of work. This was the performance that Tony Vitello was counting on, as he gave him the nod Saturday night. Along with the players behind him, the Vols defense did a great job of helping out their ace.

It would only be appropriate for Tennessee to make things dramatic, which they did in the 8th inning on one at-bat. After Dylan Crews started off the inning with a single up the middle, LSU had the tying run at the plate. Sean Hunley struck out the 2nd batter of the inning, leading to a monumental next at-bat for the Vols. As Tre’ Morgan was struck out by Hunley, Connor Pavolony through a rope to 2nd base, getting Crews out on the steal. Tennessee pulled off the 2-out play and shutdown any kind of momentum the Tigers were building, as Pavolony definitely made up for his throwing error earlier in the game. 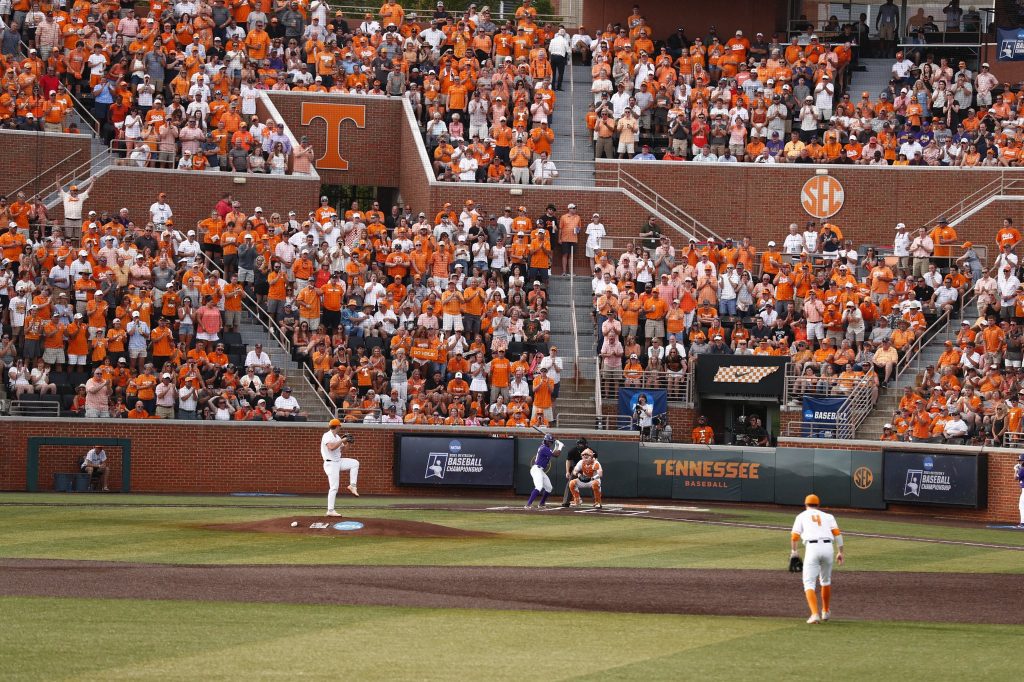 This team loves to make the fans nervous, especially Tony Vitello, as he mentioned postgame.

“These kids have zero regard for my heart, it’s just never easy”

The crowd was on their feet, not just the ones inside the stadium, as the Vols took the field in the 9th inning, three outs away from taking game one. LSU wasn’t going down without a fight, as they put runners at 2nd and 3rd, with two singles. There was one out on the board and Hunley was looking to close out the Tigers. After a groundout to first, LSU was down to their last out.

As the crowd continued to roar, especially outside the stadium, Sean Hunley had a 3-2 count on Jordan Thompson. The next pitch sent the Tennessee faithful into a frenzy, as another strikeout was put on the board and the Vols closed out the 4-2 win over the Tigers. 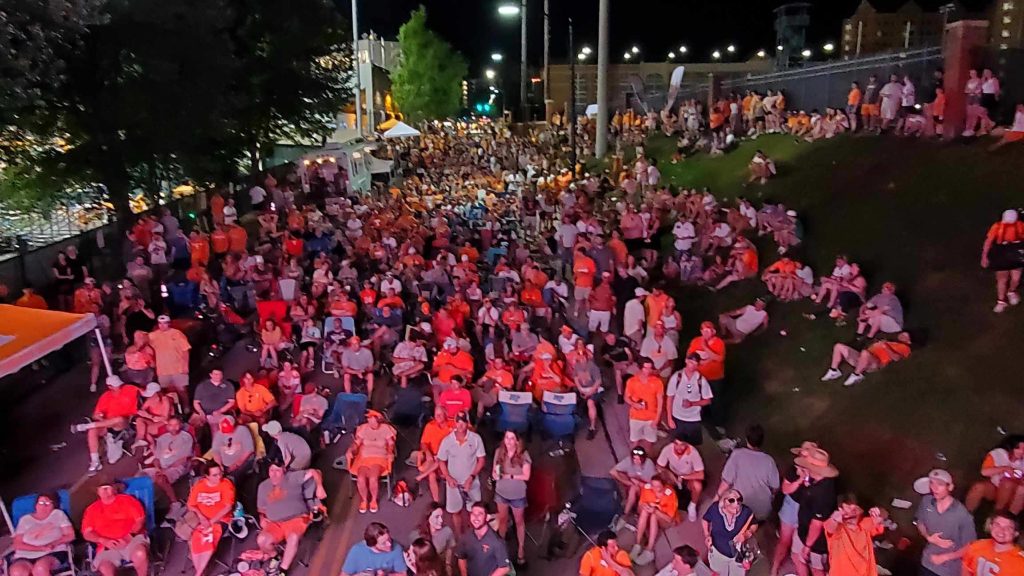 It was just like any other Tennessee game, dramatic and full of heart. The way this team played around Dallas and Hunley continues to show how dangerous they can be at any time. It’s almost hard to believe for some, but the Tennessee players are now facing one the biggest game of their careers to date.

The Vols will take the field Sunday afternoon looking for the win that will send them to the College World Series. I’ll type it again for you to ingest, Tennessee is one win away from Omaha.

If they can get the usual from Blade Tidwell, the Vols have a great chance of closing this thing out tomorrow and making their travel plans for Nebraska. But it’s the SEC and things will almost certainly be dramatic on Sunday, per usual.

Buckle up, Tennessee is playing with fire, just the way they like it.