If you were worried about this Tennessee baseball team having the trip to Omaha get in their heads, Tony Vitello put that to rest on Thursday afternoon. The Vols landed in Nebraska on Wednesday, looking to start their preparations for the College World Series, but also soak in the environment, which is well deserved, after the season they’ve had so far.

A lot of the talk surrounding this Tennessee club is how they would adapt to the bigger field in Omaha, compared to most they’ve played in this season. But as Tony Vitello said, this is almost like a “mini Hoover”, referring to how the ballpark played in the SEC Tournament, especially when it comes to distance and foul ground. This is something that Vitello thinks will benefit pitchers like Blade Tidwell and Chad Dallas, mentioning it gives them more room to play with pitches. That’s actually a smart reference, as it could play right into their hands, especially with how they approach Virginia.

For this team, Vitello feels like today was the first day they could catch their breath, coming off a grueling few weekends of tournament play. The players were doing video production work for ESPN and also getting a chance to walk around the ballpark that will host them over the next few days, hopefully two weeks, if you’re Tennessee. 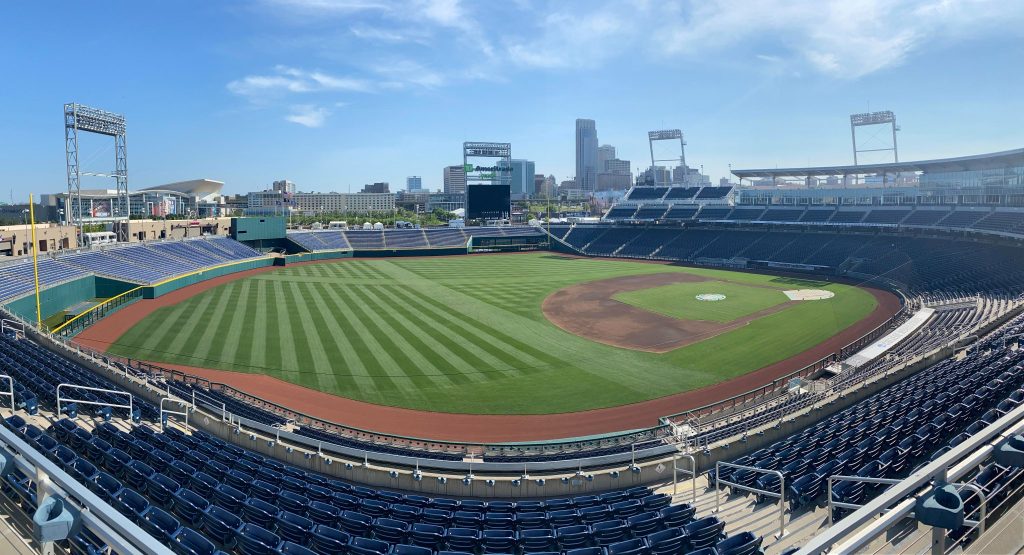 But for many, it’s the opportunity to be there and not taking anything for granted, knowing that the work they put in during the winter, is paying off in the summer. When Vitello was asked about comments Vanderbilt coach Tim Corbin made about his team, mentioning that after they played earlier in the season, Corbin thought they had just played an Omaha type ball club, he was appreciative of the comments, noting how big this is for the state. When you really break it down, it’s very beneficial to have the State of Tennessee get the attention this week, as Vitello mentioned that it definitely helps recruiting and getting folks to the park.

The Vols don’t play until Sunday, so they’ll get two more days of light practice in, before switching to game day mode starting Saturday night. Also, Will Heflin did get the opportunity to throw some practice innings earlier in the week, which is great for a guy who hasn’t pitched in over 10 days. When asked about if he was worried about Heflin not throwing much recently, Vitello was pretty positive about Heflin after practice on Monday.

So, the Vols are getting comfortable and that’s just what Vitello wanted, as they continue working towards being prepared for Virginia, Sunday afternoon. Folks on the outside will have a hard time understanding this, but this Tennessee team is a hard one to rattle, there aren’t many things that can shake them. As Vitello likes to say, they are on a business trip, but you have to throw in a little fun to keep them loose, which is exactly what the staff is doing.

It’s not lost on Vitello just how much it means to be in Omaha, but he also knows they’re not out there to just get a few hours of marketing time.

They want to be playing on June 28th, which means they’ll be playing for a National Championship.