The ending of a season is always hard, but for the Vols on Tuesday, it was the finale to a wild season for this group of players. A season that will be remembered for many exciting moments and running through most of the SEC, the Vols came up short in Omaha.

On Sunday it was due to hitting, but on Tuesday, the pitching ended up hurting them more than expected. It was always going to be a battle today, as Texas had a plan to attack the Vols pitching, which ended up paying off. As Blade Tidwell took the mound, it felt as though the Vols would end up in a good spot, especially after the 2nd inning. 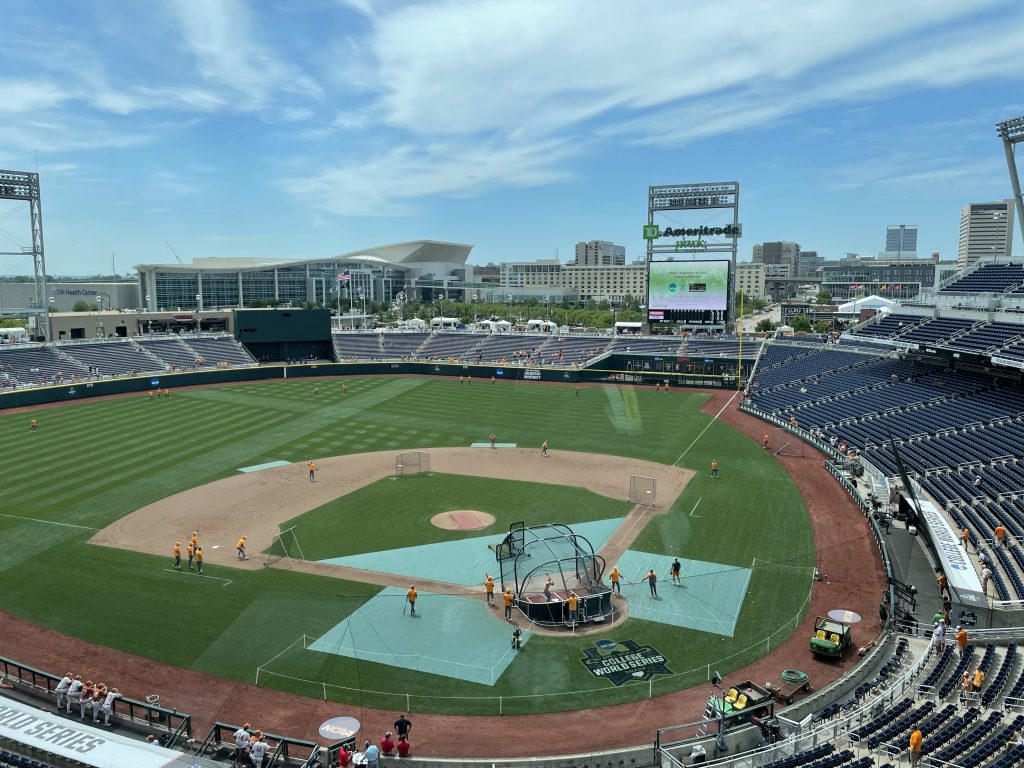 The Vols finally got on the board in Omaha during the 2nd inning, as Jordan Beck hit an RBI-double, bringing Drew Gilbert home. This was followed up by Pete Derkay grounding out to first, but driving in Lipcius. Tennessee held a 2-0 lead, for just a bit.

It didn’t take long for Texas to hit back, after Blade Tidwell walked the first batter of the 2nd inning and gave up a single on the next pitch, Eric Kennedy blasted a 3-run homer to right field. Texas took the 3-2 lead and it was game on from there. After adding a run in the 3rd, the Longhorns led 4-2, with the Vols looking to keep things close.

The 3rd inning is where Tennessee failed to take advantage of the situation, as they had bases loaded, with 0 outs. After Drew Gilbert hit into a double play, with the lead runner out at home, the Vols had one last chance in the inning. But, unfortunately, Evan Russell flied out to center and the inning ended without Tennessee putting a single run on the board. It came down to advancement and the Vols just couldn’t find the breaks.

They finally got a break in the 4th inning, as Connor Pavolony and Liam Spence both had RBI-Singles, tying the game at 4-4. For this moment in time, it felt as though Tennessee was in the right position, momentum wise, but again, it didn’t last long. The Vols turned to Sean Hunley in the bottom 4th, as Tidwell had thrown 62 pitches, but seemed to be lacking “conviction”, according to Tony Vitello.

“I think Blade was throwing the ball all right. They were on him for whatever reason. I think he was getting frustrated about certain things. And then a third thing was there was just a handful of pitches where he didn’t have the conviction that I’ve seen out of him in the past few weeks. That was just kind of my read.” 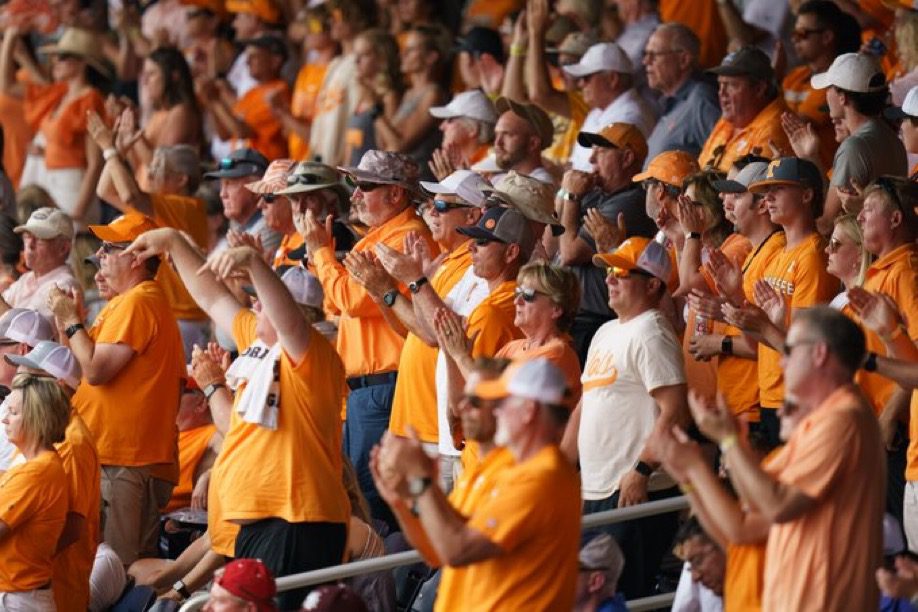 Tennessee ended up not holding onto the lead long, this time either, as Texas scored three more runs in the bottom 4th, extending the lead to 7-4. After this inning, it never felt like the Vols were in it, from an energy standpoint or even a hitting edge. It felt bland, which summed up this game for Tennessee, especially from a pitching standpoint.

This wasn’t the only piece of craziness in the 4th inning, as assistant coach Ross Kivett was ejected from the game, following a tough call at home plate, which it looked like Pavolony had made the tag. It felt unwarranted and Ross let the umpire know about it, as he was already tossed.

“Well, I thought it was a really clean relay. Jordan Beck got over there in a hurry. Got it to our infielders. They make a clean throw. Pav makes a clean tag. So you kind of anticipated the thing being an out.”

As Tennessee struggled to muster any kind of offense for the rest of the game, it was more less a ticking clock towards the end of an incredible season for Tennessee. As the final out was made, the Vols hard season had come to an end, after tough week in Omaha. It wasn’t the perfect ending, it wasn’t even a decent ending, but they earned the right to be here. This was a major stepping stone for the Tennessee program, which was in a bad place, just four years ago.

Tony Vitello sat in the outfield after the game, watching his players embrace each other, while shedding a few tears, clear to him how far this team had come. During his postgame press conference he didn’t hold back when talking about his players, as he started to get choked up, the emotions he has for his players weren’t going to be held back.

“And then you know — there’s a meme for all the people that don’t like us, can’t see any tears yet, but was locked up in that condo for a long time, man, a long time. And then we had to watch these guys hit BP on the field by themselves, play catch, couldn’t do anything. And then you got to be around them for a whole year. And it was a pleasure cruise.”

This team will be remembered for many special moments that occurred over the course of the last five months, many will never be forgotten. Its hard to explain, just how much this team has meant to the coach and how much the coach has meant to the team and community. One thing is for sure, these seniors have left the program in much better shape than we they arrived. 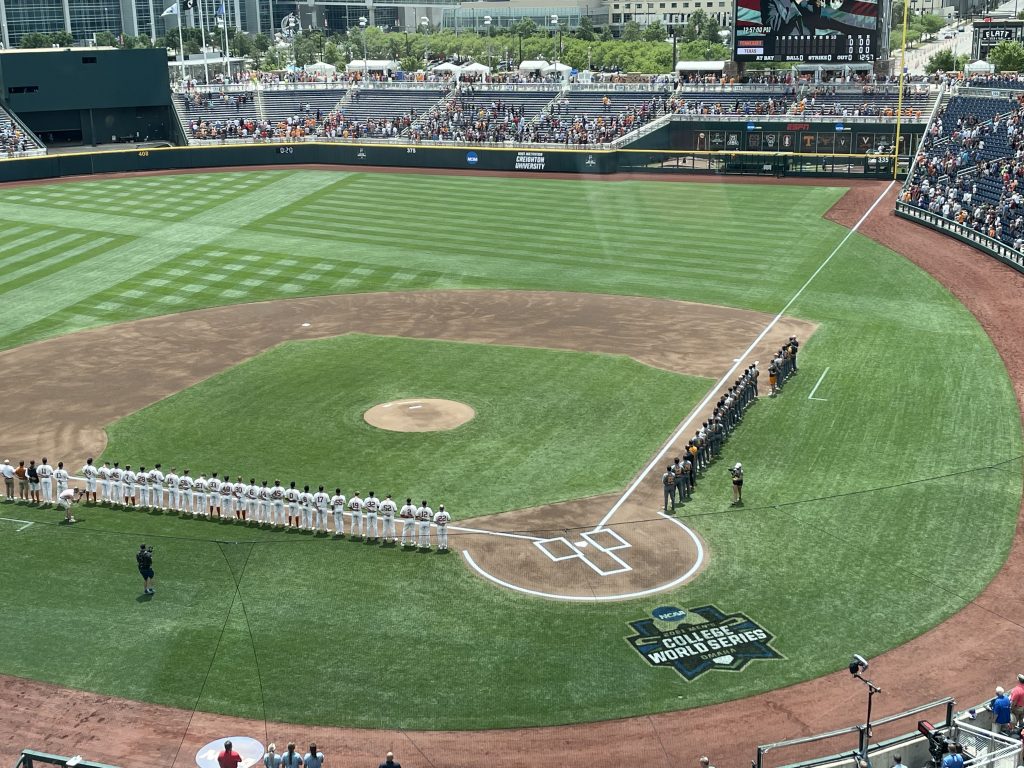 It was a tough moment as Tony Vitello headed to the dugout after the game, giving his players some time in the outfield to reflect. Vitello waved to the crowd, tipped his cap, thanked the fans for coming and tried to collect himself for a moment, before meeting with the media. This group had gone through so much to get here, which wasn’t lost on their head coach.

What else would you expect from a coach who pushed the limits this season, while also still being amazed at how much support Tennessee fans have given him and bis team.

“The Vol Walk on Saturday is pretty impressive It’s a tradition that’s gone on for a long time. But these kids somehow inspired the Vol Walk for baseball to be created. And it’s a pretty incredible sight and emotional thing. So, thank you to those people, but also the people that just helped boost up our program into being an Omaha-type program. We hope to be that for multiple years, not just this year.” 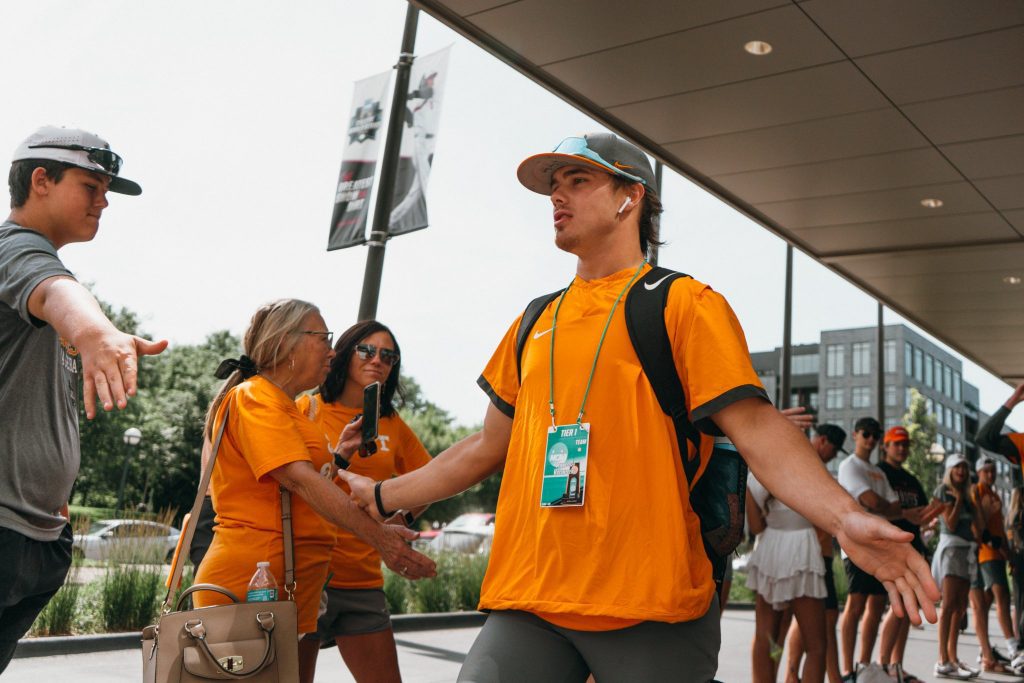 But, one thing is for sure, this team captivated a fan base, behind their leader. I think if you look at the broader scope of this season, you’ll understand just how much this team had grown, especially while navigating a season through covid. This time last year, they were still getting over a season that was cut short. One year later, they were embracing each other in the outfield of TD Ameritrade Park.

“As much as you get angry at certain things or you gotta go to COVID testing and stuff like that, it was a good time, it was a really good time to be around those guys. And they created something. So you get handed the baton. You run with it. That’s one thing and kudos to all those people that have done that, but these kids literally invented things. And they did it in a really fun fashion.”

This group ignited a fan base, won a division title, swept through the Regionals and Super Regionals, while finally making it back to Omaha. It wasn’t the ending they envisioned, but the road to the College World Series will be talked about for a very long time. This team will have memories that live on forever, and they’ve now reset the bar for Tennessee Baseball.