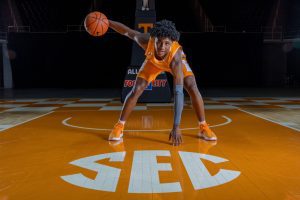 The two talented prospects have been on Tennessee’s campus over the last couple of days to get to know the Vols’ coaching staff and see their facilities, according to a post from Edwards Jr. on Twitter.

Official visit to Tennessee was amazing! Vol nation how do I look ? 🧡🤍#notcommited pic.twitter.com/w2jhoQdJV4

Edwards Jr., from Knoxville Catholic high school, was recently named the PrepXtra Male Basketball Player of the Year in Knoxville. The rising senior point guard is currently ranked as the third-best prospect in the state of Tennessee. Plus, his local ties have kept him on the Volunteers’ radar for a long time.

“Vol nation,” Edwards said on Twitter. “How do I look?”

Mitchell, on the other hand, is a six-foot-seven small forward from Bishop McLaughlin Catholic high school in Spring Hill, FL.

The Tennessee basketball coaches are highly interested in both prospects. Especially as Tennessee head coach Rick Barnes looks to find his first commitments to the 2022 class.

Neither player has officially announced their commitment.