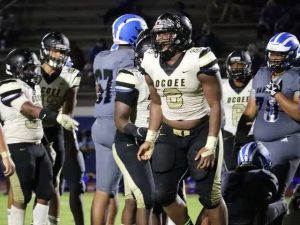 The Tennessee Volunteers have found their seventh commit of the 2022 class as three-star defensive lineman Jordan Phillips officially announced his commitment to the Tennessee football team Thursday evening via USA Today.

With a listed weight of 300 pounds, Phillips is a massive interior lineman from Ocoee, FL. He also is the second commitment in the class on the defensive line and the third defensive player overall.

Phillips chose Tennessee over the other listed finalists of Florida, Georgia, Georgia Tech, and Maryland.

In a position that is always in need of depth, Phillips’ commitment to Tennessee helps provide that exact thing. And even though he doesn’t jump off the rankings list, Phillips does possess a high level of potential through his raw strength and power.

Phillips only took three official visits before making his decision, and they all came in the month of June. He started out the month visiting Maryland, and then took a visit to Georgia Tech before closing out the month with a trip to Tennessee just six days ago.

In his most recent high school season in 2020, Phillips finished the year with 71 total tackles and 15 tackles for loss. He also caused five sacks and forced two fumbles on the season, according to 247Sports.

Currently, Tennessee now has seven commitments in the 2022 recruiting class. On the defensive side, the Vols have received a commitment from DL Jordan Phillips, DL Venson Sneed, and LB Elijah Herring.

On the offensive side of the ball, Tennessee has received a commitment from QB Tayven Jackson, TE Brody Foley, RB Dylan Sampson, and OT Brian Grant.