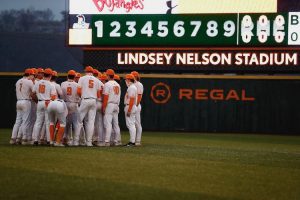 The Vols have already begun retooling their pitching staff this offseason adding Missouri transfer Seth Halvorsen, and Dollander would be another valuable addition for Tennessee.

“The visit was awesome,” Dollander said. “We were able to do just about everything. Saw the whole facility. Saw the indoor football facility where the other weight rooms are. It was really nice.”

The 6-foot-3 right-hander arrived in Knoxville on Thursday before leaving on Saturday. On top of touring facilities, Dollander was able to meet the Vols’ whole coaching staff. There he was able to continue to build his relationships with Tennessee pitching coach Frank Anderson and head coach Tony Vitello.

“I got to talk to all the coaches,” Dollander said. “I really liked the strength coach (Quentin Eberhardt). He really seems like he knows what he’s doing and you can’t ask for much more than that. Coach Anderson, he seems like he’s a legend.”

Dollander started in 11 of his 12 appearances in 2021 throwing 49 innings while striking out 64 and walking 28 batters.

One of the Evans, Georgia natives’ starts came the opening weekend of the season against Tennessee when he allowed just three hits and one run while striking out eight in 5.2 innings.

Dollander possesses a mid 90 fastball and a sharp slider. Anderson impressed the transfer with his plan to develop his offspeed repertoire.

“I love Frank so far. He seemed like he knows what he’s talking about and has a pretty good plan for me if I went there,” Dollander said. “Sharpening up the off-speed stuff. Making it harder and sharper. Just be more consistent with it. Be able to throw more strikes.”

As for Vitello, Dollander enjoyed meeting Tennessee’s headman but was even more encouraged by what current Vol players told him.

“Coach Vitello is a player’s coach and that’s what I love to hear,” Dollander said.

Dollander received interest from a plethora of power five and SEC schools but has narrowed down his finalists to Tennessee, Texas Tech, and Arkansas.

Dollander visited Texas Tech the week before his visit to Knoxville and has a visit set up for Arkansas this week.

As for when he’ll make a decision? Dollander says he plans on making his choice following the MLB Draft set for June 11-13.