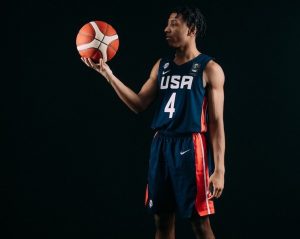 One of the most exciting additions to the 2021 Tennessee basketball team made international headlines on the court on Sunday, as Team USA point guard Kennedy Chandler dominated in their second game in the FIBA Basketball World Cup.

Team USA’s U19 team defeated Mali on Independence Day by a score of 100-52, while Chandler tied the second-highest scoring total on the team with 11 points.

Even though Chandler just barely cracked into double digits in scoring, his efficiency in Team USA’s second game was off the charts.

Chandler finished the game with 11 points on 4-of-5 shooting from the field while making two of his three attempts behind the arc. His 80% field goal percentage also led all scorers in the game.

Aside from just scoring though, the Tennessee guard also hauled in a rebound and dished out two assists during his 16 minutes of play. He also had a plus/minus of 15.

Chandler’s improved play was a welcome sight in the American’s win against Mali. Especially considering from a scoring standpoint his first game did not go as well.

It seemed like Chandler got off to a slow start in Team USA’s 83-54 opening win against Turkey. In that contest, Chandler only scored five points on 2-of-7 shooting. Although, six of those total attempts came from three-point range with only one made.

However, Chandler did have the best plus/minus (24) and played the most minutes (23:54) on the roster in that opening game. He also totaled five rebounds and five assists, showing how early familiarity can still shift around with a new team.

So ultimately, both of Chandler’s first two contests have been successful in different ways. However, as the former five-star continues to find his footing with the USA roster, one can expect that his game will only trend upwards.

Chandler was the top-ranked point guard in the country as a high-school recruit and will make his debut for the Tennessee basketball team during the 2021 season. The Vols opening game will be at home against UT Martin on Tuesday, Nov. 9.

As for the FIBA World Cup though, Chandler will be on the court for Team USA (2-0) on Tuesday, July 6 for their third game of the tournament against Australia (1-1).