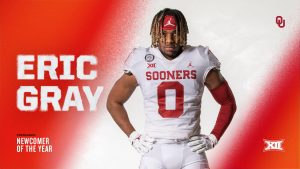 A former Tennessee running back has already turned heads in Norman, OK as Oklahoma Sooner back Eric Gray has been named the preseason Big 12 Newcomer of the Year.

The news was released by the Big 12 conference, who listed all of their preseason awards on Wednesday.

Gray, who led Tennessee in rushing yards in 2020, transferred to Oklahoma after Jeremy Pruitt was fired from the program.

The former Vol accounted for 1,311 rush yards during his career at Tennessee. He had 772 yards on the ground and added in four touchdowns in the 2020 season.

Gray was also the second-leading pass catcher in terms of receptions for the Vols in the shortened season.

The news of Gray’s award also comes just one day after Oklahoma head coach Lincoln Riley announced that sophomore running back Mikey Henderson had been dismissed from the Oklahoma program.

Gray had a number of standout moments at Tennessee. He won the 2020 TaxSlayer Gator Bowl MVP award in 2020 and was on the 2019 Pro Football Focus All-Freshman team.