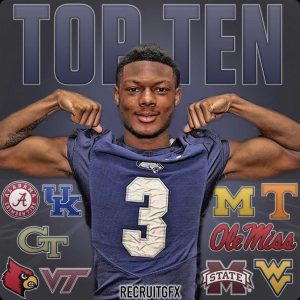 The Volunteers Football team received their ninth commitment of the 2022 class on Thursday as three-star wide receiver Marquarius White has officially committed to Tennessee via Twitter.

The Pinson, AL native is an unbelievable athlete and showed that off in multiple sports in high school. White is also a terrific track athlete, which is translated into his skill on the football field.

White’s talent on the gridiron is a direct result of his incredible speed. In fact, he has already been clocked in with a 4.37 40-yard-dash at just 17 years old.

“What separates me from the rest of the other players is that I’m smart and competitive,” White said in his NCSA personal statement. “Some people give up on most things but that’s something I don’t do such as my size; because my body frame is small. But I’m young and determined to get my body to the proper condition and size. I am very coachable, and I take constructive criticism and learn from it instead of giving up. I use it for the drive to get better as a person on and off the field.”

White is the sixth offensive player in Tennessee’s 2022 class and is the first wide receiver of the class to commit.

At the top of the class is four-star quarterback Tayven Jackson. With the commitment of White, Jackson also found the first wide receiver that will be joining him in the class.

Although, it is the third pass-catcher overall. Tennessee also has a commitment from three-star tight end Brody Foley and three-star running back Dylan Sampson.

Marquarius White is a very versatile pickup for Tennessee. His speed and quickness should be something that coach Josh Heupel and offensive coordinator Joey Halzle can rely on.