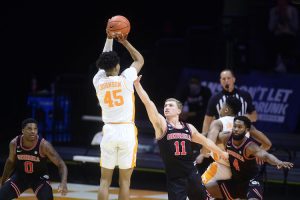 In a video posted to Twitter by Mike Schmitz of ESPN, Johnson is seen going through a number of shooting drills. And in the video, Johnson seemingly can not miss from behind the arc.

The bounciest leaper in NBA Combine history (48-inch vert), Keon Johnson is far more than just an athlete. Think he’ll open some eyes with his shooting potential throughout the pre-draft process. Great balance. Fan of his no-nonsense approach and competitiveness. Big-time upside. pic.twitter.com/7vdxedBycX

During his one season at Tennessee, Johnson was a 27.1 percent shooter from three-point range. This was the lowest percentage among the Tennessee starters, but Johnson seems to be working hard in that area before the draft.

One of the most anticipated aspects of Johnson’s game in the NBA really is just his athletic ability on the court. While Johnson may not have the pure skill of others in the draft, his athleticism is unmatched.

Not only that, but Johnson set the new NBA Draft Combine record in max vertical leap (48 inches).

The NBA Draft will take place on July 29 from the Barclays Center.