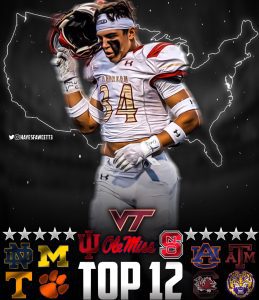 Drayk Bowen, the top-ranked linebacker prospect in the country in the 2023 class, has released his first Top 12 list and Tennessee football has indeed made the cut.

“I want to thank all the coaches who have taken the time to recruit me and build a relationship with me and my family,” Bowen said in a Twitter post on Saturday. “With that said, it’s time for me to begin to focus on the schools I have a high interest in both athletically and academically.”

Bowen is a 6-foot-2, 215-pound linebacker from Merrillville, IN with 25 Division-1 offers.

So far, the five-star prospect has not officially visited any school but has taken a few unofficial visits.

In fact, Bowen’s first unofficial recruiting visit was to Tennessee on June 7. The Tennessee Volunteers football team offered a scholarship to Bowen on April 11.

Bowen also tweeted out a photo of himself at Lindsey Nelson Stadium on June 6. This was during Tennessee baseball’s 3-1 victory over Liberty in the Knoxville Regional round of the NCAA tournament.

On June 8, Bowen attended a camp at Ole Miss, and then unofficially visited LSU on June 25.

Those three schools are the only ones that Bowen has visited so far. Although, one can expect that his recruiting journey has only just begun.

Bowen does have four Crystal Ball predictions to Notre Dame on his 247 Sports profile, as many leading experts believe that the five-star prospect will stay in-state.