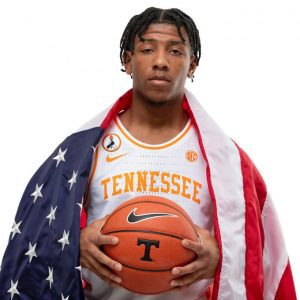 Tennessee Basketball point guard Kennedy Chandler and the Team USA basketball team have finished their undefeated run in the FIBA Basketball World Cup with a victory over France in the Championship game.

Chandler finished the game with five points, seven rebounds, and one assist.

Team USA had a dominant run through the FIBA Basketball World Cup, as they finished the tournament with an undefeated record of 7-0. Team USA defeated France in the championship by a score of 83-81.

In the tournament as a whole, Chandler was one of the most important pieces on the American’s roster. The future Tennessee guard accumulated 54 points in his seven games played.

In total, Chandler averaged 7.7 points in the tournament. He also added in 2.9 rebounds and 3.4 assists per game as well.

Over the span of the seven games, Chandler displayed a range of talent that will translate over to the Tennessee basketball team in 2021.

The future Tennessee guard continually played with a high-level of intelligence that ultimately caused him to finish fourth on the team in minutes played. Not to mention, Chandler was only in the starting lineup for Team USA once.

Chandler did have one scary moment in Team USA’s semi-final match up against Canada. The future Volunteer took a hard fall after a two-handed dunk attempt.

However, Chandler assured fans that he was okay via social media after the game.

Thank you to everyone who expressed concern for me. By the grace of God, I escaped with no serious injuries and I am just a little sore. Please continue to support my teammates and I as we have one game left for the U-19 championship. #USA

The only SEC player to be represented on the Team USA U19 squad by the SEC was Tennessee guard Kennedy Chandler.

Overall, Chandler’s pure athleticism was on display all tournament long. The Tennessee guard showed speed, strength, intelligence, and selflessness during the tournament.

There were a number of key plays that showed this as well. There were times when Chandler would play more of a decoy role, which allowed his teammates to take advantage of mismatches.

Now that his time with Team USA is done, Kennedy Chandler will now be able to turn his attention to Tennessee.

The Volunteers five-star point guard will make his debut for the team in 2021. The Tennessee basketball team’s season will tip-off on Tuesday, Nov. 9 against UT Martin at home.