On Tuesday afternoon, Tennessee Athletics Director/Vice-Chancellor Danny White announced that nine head coaches had received a contract extension from the University of Tennessee. 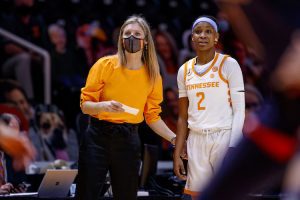 “First, I’d like to acknowledge the fact that I inherited a very impressive roster of head coaches when I arrived at Tennessee back in January,” White said in a statement posted to the UT Sports website. “That’s a credit to those who came before me. Extending contracts for successful coaches is one indicator of a healthy athletics program, and we plan on continuing to be aggressive with extensions and rewarding success moving forward.”

Harper, similar to Barnes, also received a two-year extension, which will run through the 2025-2026 season.

Kredich’s contract was extended through 2025-2026 as well, and Ojeda’s contract now will run through the end of June 2026.

Tennessee baseball coach Tony Vitello had his contract restructured and will now run until the end of the 2026 season.

And lastly, Woodruff received a contract extension through the end of 2026. Woodruff led the men’s tennis team to an SEC Championship in 2020.

At the beginning of 2021, White signed a rolling five-year contract to become Tennessee’s next Director of Athletics.

In 2020, 11 Tennessee teams finished their season ranked in the Top 25 of their respective sport.