The Tennessee Volunteers have always had a storied football program dating back to the days of General Neyland, Condredge Holloway, Peyton Manning, and many more. But they have also had some down moments in recent years to go along with all the good times.

So where exactly does Tennessee football land in the all-time rankings? Glad you asked.

The Tennessee Volunteers have a .671 win percentage, which is ranked as the 10th highest win percentage in college football history (with a minimum of 500 wins).

So yes, Tennessee football does still rank in the Top 10 all-time, even with the trouble of the 2000’s still underway to an extent.

It is also worth noting that the Tennessee Volunteers still hold the second-best winning percentage among all SEC teams as well. Tennessee is only ranked behind SEC West rival Alabama.

The full Top 10 list, which was posted to Twitter by GM of College Football, listed all the teams in order that have a minimum of 500 wins. 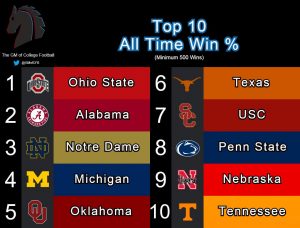 Michigan is ranked in the fourth spot at .727, which is only a fraction higher than Oklahoma at .726.

The Tennessee Volunteers round out the list at No. 10.

The Brief History of Tennessee Football

The best season in Tennessee football history was their 1998 season, when the Vols achieved a perfect record. Tennessee went 13-0 and won the 1998 National Championship in the process.

Not only that, the 90’s were Tennessee’s best decade as a whole.

With the exception of the 90’s and the 2010’s, Tennessee football has stayed around the 60-70 percent win margin per decade for the most part.

So, the Tennessee Volunteers still do rank in the Top 10 for teams that have a minimum of 500 wins. However, the 2010’s has brought the Vols number down a substantial bit.

If Tennessee wants to keep their spot in the Top 10 for all-time win percentage, the 20’s will have to roar once again.