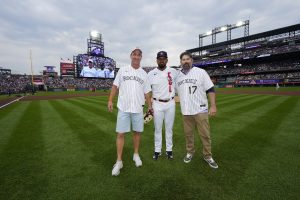 The 2021 MLB All-Star Game was held in Colorado, and none other than Tennessee football icon Peyton Manning was there to deliver the first pitch in front of millions.

The first pitch of tonight's All-Star Game was thrown by none other than the legend himself, Peyton Manning 🏈 pic.twitter.com/LYcl23Xskc

Now, in fairness, Manning’s pitched would have absolutely plunked the shin bone of any left-handed batter.

But it’s also worth noting that his first pitch at the Arkansas vs Tennessee game did seemingly go much better.

It is also worth noting that Peyton Manning is a five-time NFL MVP with the second-highest completion percentage among quarterbacks with over 8,000 attempts.

So, it’s safe to give the Tennessee legend a pass on the diamond.

Manning strolled out to the mound in a Colorado Rockies Larry Walker jersey, as well.

It’s safe to say that Peyton Manning hasn’t thrown his final first pitch, either. The Tennessee legend may even wind up back in Lindsey Nelson Stadium next year.