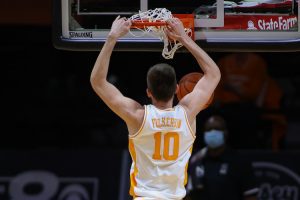 Tennessee basketball forward John Fulkerson may have revealed one of his best-kept secrets recently, as the Kingsport native was taken on an all-access tour at the Mayfield Ice Cream factory.

The story is short and simple, and Fulkerson does tell it best.

John Fulkerson’s personality came to the forefront once again as the sixth-year senior was taken on a Willy-Wonka-style adventure through the milk factory. The video was posted to social media by the Tennessee Basketball Twitter account.

The tour consisted of all aspects of the ice cream making process. The group started in the milk plant, and then made their way all the way through to the end. There they saw how the milk is turned into the actual ice cream product.

“Milk over water,” Fulkerson exclaimed to the Mayfield employees in the video. “I love milk… I’m telling you.”

With all the milk that Fulkerson has seemingly consumed each day, he should be ready to go for his sixth year with Tennessee.

With Kennedy Chandler having returned from his Team USA run, the Vols roster for the fall has begun to take shape in Knoxville.

Tennessee will tip off their season on Tuesday, Nov. 9. The Volunteers will take on UT Martin at home in their season-opener.