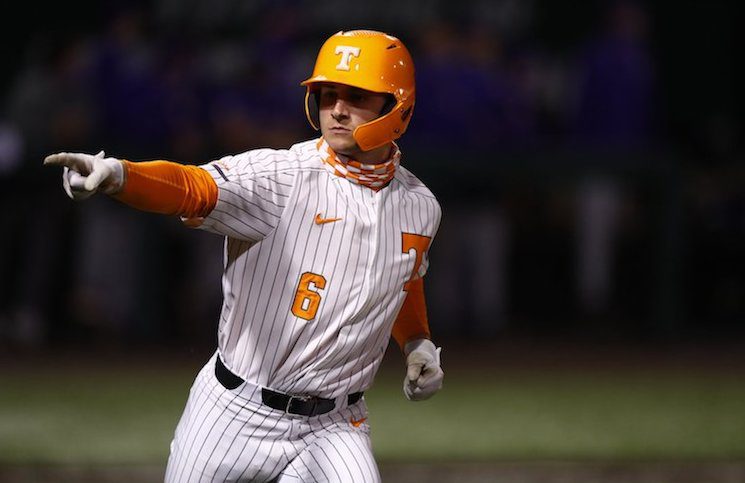 Tennessee outfielder Evan Russell will return for a fifth season, the Lexington, Tennessee native announced on his Twitter Saturday night.

Russell completed his fourth season in Knoxville this spring, hitting .238 with 14 home runs and 43 RBIs. The left fielder has played for collegiate seasons but due to COVID-19 eligibility relief, Russell had the opportunity to return for one more season.

The three year starter told reporters that he was leaning towards beginning his professional career but that going to Omaha and the College World Series had him rethinking things.

Now, Russell returns to a loaded Tennessee outfield. Sophomores Drew Gilbert and Jordan Beck are both returning and Mississippi native Kyle Booker impressed as a freshman last season and has dominated the California Collegiate League this summer.

In Russell’s first three seasons, he was a reliable contact bat— hitting between .260 and .274 all three seasons. In 2021, Russell struggled to consistently get on-base, hitting .238.

Russell was hitting under .200 when he hit three home runs against LSU the second weekend of SEC play. The 5-foot-11 outfielder would turn in a second three home run game, going deep three times against Vanderbilt. The first two blasts came on the No. 2 pick in the MLB Draft Jack Leiter and the third was a go-ahead grand slam in the eighth inning.

After not getting the start Friday night vs Vanderbilt Evan Russell was hitting .198 with 6 HRs 26 Ks in 26 games…

Since that night, @EvanRussell_4 is hitting .429 with 6 HRs in 6 games. Vitello poked the bear 🔥 @Vol_Baseball pic.twitter.com/Mg6P6VejA8

While his contact hitting dropped, Russell’s power hitting improved. The junior combined for 11 home runs in his first three seasons before finishing third on the Vols with 14 in 2021.

Russell isn’t the only Vol senior who could elect to return for one more season. Luc Lipcius and Redmond Walsh each went undrafted and have one more year of eligibility.

While Lipcius returning seems unlikely, there’s a real possibility Walsh could return for a final season.

Small Strives To Grow As Player, Leader In Young Running Back Room

Small Strives To Grow As Player, Leader In Young Running Back Room

Heupel’s Quarterback Job at Tennessee Will be “Earned”, Not Given