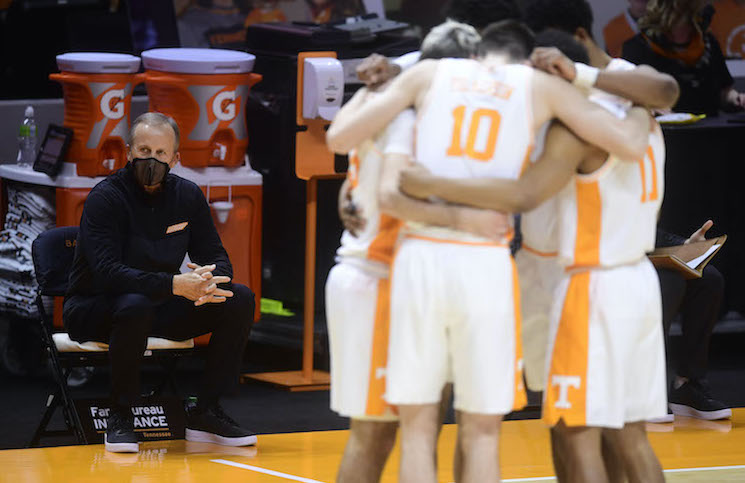 Tennessee basketball will have a chance to compete for a SEC title again in 2021, but before they do they’ll face a grueling non conference schedule.

The Vols play 13 non conference games, 12 before the SEC slate begins, with seven coming against power five opponents or teams projected in the NCAA Tournament and six coming against mid or low majors.

Villanova— who Tennessee plays in the first game of the Hall of Fame Tip Off— Purdue and Texas will likely be in the nation’s top 10 to begin the season.

The Texas matchup comes on the road and in January as part of the SEC/Big 12 Challenge. The battle of the UTs will be Rick Barnes’ first time returning to Austin since Texas fired Barnes following the 2014-15 season.

The Longhorns will be a Final Four contender in Chris Beard’s first season after landing top transfer Marcus Carr.

If Tennessee plays North Carolina instead of Purdue in the Hall of Fame Tip Off they’ll face another top brand and a top 25 opponent that will draw national television eyes.

Colorado, Memphis and Texas Tech are all projected to make the NCAA Tournament and Arizona is currently in ESPN Joe Lunardi’s first four out.

The strong competition shouldn’t just give Tennessee experience against solid competition but the nation’s best.

That should prepare Rick Barnes’ squad not only for what’s set to be a strong SEC that could get eight teams in the NCAA Tournament, but for the second weekend of the Big Dance if the Vols make it that far.

The challenge should be good for a Tennessee team who seemed to suffer from the lack of a strong out of conference a season ago. Of course, that wasn’t Barnes and his staff’s fault. The season was delayed two weeks and then non conference matchups with VCU, Gonzaga and Notre Dame were cancelled due to a COVID-19 outbreak in Tennessee’s tier one personnel.

This season, the Vols are relying on young players again, including freshmen Kennedy Chandler and Brandon Huntley-Hatfield as well as transfer guard Justin Powell.

Tennessee may face some learning curves with a young roster and so many challenging games early in the season but it should be a good early season barometer for the Vols and beneficial in the long term.

The schedule will also be good for fans and after what could be another long football season, Vol fans will be ready to watch their top 25 basketball team.

Playing those games is important to fans’ experience in a sport whose regular season games have less meaning than any other collegiate sport.

That’s why I’ve always believed Tennessee should continue to play Memphis past this season when its current three game contract runs out. Giving fans a rivalry game that truly means something in December is good for the sport.

So kudos to Barnes and assistant Mike Schwartz— who plays a major role in Tennessee’s scheduling— for preparing a challenging schedule that doesn’t only bode well for the 2021-22 Vols in the long term but gives Tennessee fans great early season entertainment.