It’s not the same looking SEC media days this year, as there aren’t numerous fans waiting for coaches and players inside the hotel, even the chaos in the ballroom is pretty mild for the first day. But on Tuesday, none of that will really matter, as Josh Heupel takes to the podium for the first time as an SEC head coach. Some of the questions will be hard to answer and some he will knock out of the park, but none of that really matters tomorrow.

For Heupel, this is about selling the program he inherited back in January, with not many answers for what happened during the previous regime. He’ll get asked about the NCAA investigation, but don’t expect much of an answer. He won’t go down the road without a full answer from the university. It’s been hard enough for him to navigate these waters without having the entire SEC media core asking him about when they expect a conclusion. Tomorrow will be about his players and what they’re trying to build, as we get closer to fall camp.

He’s still learning how to navigate through building up his roster, while also trying to set the tone for the upcoming season. He’ll be asked about the starting quarterback, but don’t expect any kind of answer. Besides complimenting the current room, he won’t tip his hand, even if he has an inkling on who’s been performing the best over the summer. 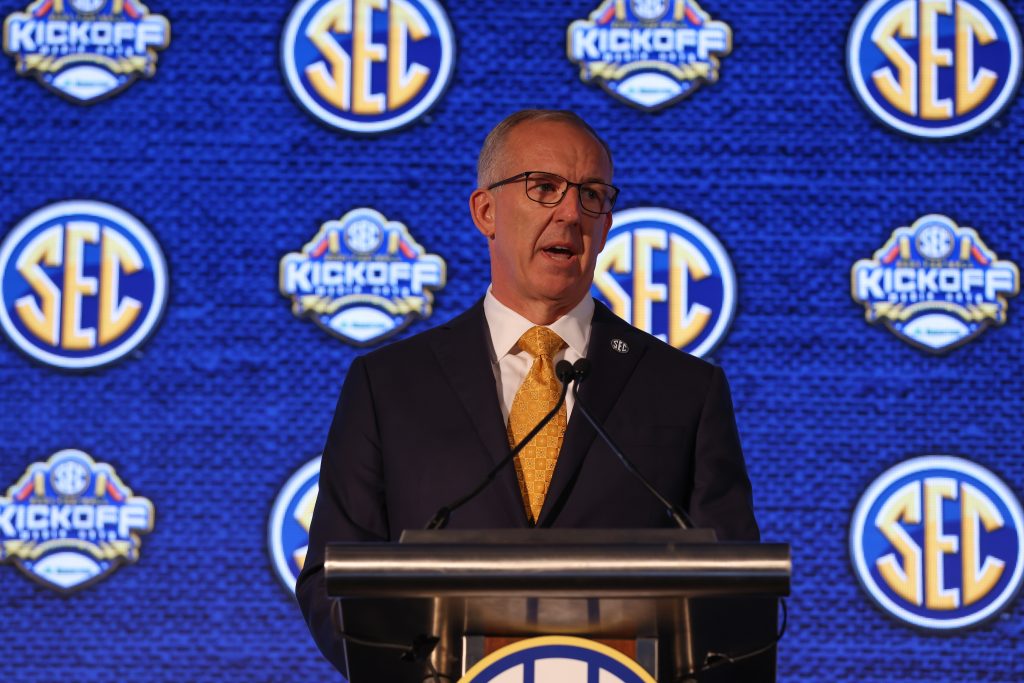 SEC Commissioner Greg Sankey speaks to the media during the 2021 SEC Football Kickoff Media Days on July 19,2021 at the Wynfrey Hotel,Hoover,Alabama. (Jimmie Mitchell/SEC)

I remember being in the room a few years ago as Jeremy Pruitt went on a 25 minute filibuster on his entire team, which left about five minutes for questions. I wouldn’t expect to see something like that from Heupel, as he’s been on a big stage before, just not of this magnitude. If he can handle his business in the local media gathering, then he should be ok in the main room. I don’t know how many questions that might actually surprise him, besides maybe a movie review, which we got during Dan Mullen’s press conference today.

University of Florida head coach Dan Mullen speaks to the media during the 2021 SEC Football Kickoff Media Days on July 19,2021 at the Wynfrey Hotel,Hoover,Alabama. (Jimmie Mitchell/SEC)

The most interesting answers will most likely come from Velus Jones Jr. or Alontae Taylor, who have been a part of two different regimes in the past year. We’ll see how honest they are with there answers, not that they’d be holding back, but sometimes its best to keep moving forward.

Either way, Tuesday will be the first time Josh Heupel steps up to the podium in Hoover, with a lot of questions that he just doesn’t have the answers for right now. So, take Tuesday with a grain of salt, as we get closer to the Vols hitting the practice field. The real answers will come next month, as he gets a better look at what he’s working with this fall.

In the end, that’s all that really matters for Tennessee’s head coach.