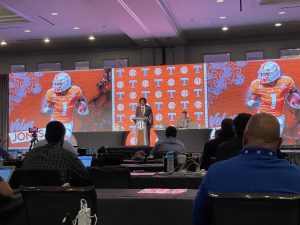 Wide receiver Velus Jones Jr. is ready for a brand new challenge with brand new optimism, as Tennessee head coach Josh Heupel installs his high-octane offense on Rocky Top. Especially with all the innovation that Heupel and offensive coordinator Alex Golesh have brought to the table.

“I feel like a kid in a candy store,” Jones Jr. said at SEC Media Days about playing in Heupel’s offense.

“This is a dream come true,” said Tennessee wide receiver Jones Jr. “Growing up as a kid, as a receiver, you dream about catching a lot of footballs.”

Heupel, along with his offensive coaching staff, will have a lot of work on their hands to rebuild the Tennessee offense. The Vols lost their leading passer (Guarantano), rusher (Gray), and receiver (Palmer) from the 2020 roster. Meanwhile, even with those three players, Tennessee still finished ranked 102 among all FBS teams in total yards.

For those counting, that’s a full 100 spots below UCF’s ranking last year. And for a returning player like Jones Jr., that’s a huge reason to have optimism for the season.

“I’m so excited,” said Jones Jr. “I couldn’t even believe it when they announced coach Heupel as the coach.” 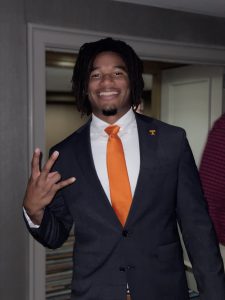 Heupel’s offenses have been successful in SEC play, as well. Heupel, as the offensive coordinator for Missouri from 2016 to 2017, improved in two key categories during his one year with the Tigers.

Josh Heupel’s fast-paced offense could allow wide receivers such as Jones Jr., Jalin Hyatt, and others to succeed in big ways. Tennessee will also need to get the tight-end position back on track, as well. Especially considering their two tight ends only accounted for 18 receptions last year.

“I did my research,” Jones Jr. said about coach Heupel when he was first announced. “We’re going to have a lot of fun. Me and my receiving core, and the tight-ends, with this offense. I don’t know, I just feel like a kid in a candy store!”