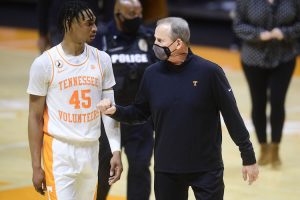 This past season in college basketball was filled with a little bit of chaos and a lot of expectations, especially in Knoxville. Tennessee looked to cash in on the true freshmen that took the court, in hopes they could lead them to a successful season.

As Keon Johnson and Jaden Springer finally took the court together, Tennessee fans were clamoring to see this duo show off their skills and be a factor for the veteran group. There were times during the season where it looked like a lot of this could come together, but unfortunately for Rick Barnes, a couple of hiccups along the way prevented this team from achieving the greater goal.

But as Keon and Jaden prepare for their names to be called at the NBA Draft, it should be noted how much they helped the Vols continue their recruiting magic off the court. As you can tell by the 2021 recruiting class, Tennessee has prospered in getting the type of player that might stick around for one or two years, which they should absolutely benefit from in the upcoming season.

So it should come as no surprise that Keon Johnson had plenty of compliments for his former head coach, Rick Barnes. During a media session after working out for the Warriors, Johnson spoke about how much his former coach helped him and his family make the right decision regarding the draft. Keon also went on to discuss the leadership Tennessee will have in returning players this season, like John Fulkerson.

As we get closer to hearing their names called next week, it shouldn’t go unnoticed how much the coaching staff played a part in developing Keon, even if he was in Knoxville for just one year. It’s not hard to tell how much they meant to him.