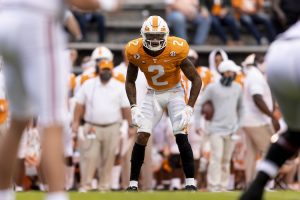 Alontae Taylor, who represented Tennessee football this past week at SEC Media Days in Birmingham, has been selected to the preseason media days Third-Team All-SEC roster.

This is Taylor’s first career selection to a preseason All-SEC roster.

Alontae Taylor isn’t unfamiliar with awards though, as the Tennessee senior has already acquired a few in his career.

Taylor was selected to the Fall SEC Academic Honor Roll in both 2019 and 2020. Not to mention, Taylor served as the SEC Football Leadership Council vice-chairman from 2020-2021.

In his career at Tennessee, the Vols’ stellar defensive back, Taylor, has been a beacon of consistency. Taylor has played in 33 games with Tennessee and started 19 of those.

The Manchester, TN native is looked at as one of the Tennessee leaders both on and off the field. And with his continually improved play on the field, it is no wonder why he was selected as Third-Team All-SEC.

Recently, at SEC Media Days, Taylor spoke about how he never intended to leave Tennessee amidst all the turmoil and change this past offseason. Which is the exact type of mentality that Tennessee will need to climb back to prominence.

Taylor wasn’t the only preseason All-SEC selection for Tennessee, either. Vols’ offensive lineman Cade Mays was selected to the First-Team All-SEC roster. And, punter Paxton Brooks was named to the Second-Team All-SEC specialists roster.

Taylor, a former four-star recruit, will enter his fourth year with Tennessee in 2021. And the newly appointed Third-Team All-SEC star is ready to make a difference.

Tennessee and preseason Third-Team All-SEC DB Alontae Taylor will begin their 2021 season against Bowling Green. That game will take place on Thursday, Sept. 2 at 8:00 p.m. ET.