One of the more athletically gifted players in the class of 2022, four-star wide receiver Shaleak Knotts, has released his official Top-3 which did include the Tennessee Volunteers. 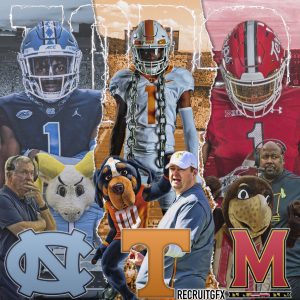 The Monroe, NC product is ranked as the third-best player in the state of North Carolina by Rivals and 247 Sports. He is also listed as a Top-100 player according to both publications.

The 6-foot-2, 187-pound wide receiver has certainly used his athleticism to his advantage throughout high school, so far. He is a multi-sport athlete but has really excelled on both sides of the football field. In high school, Knotts has played both wide receiver and defensive back.

As a wide receiver, Knotts has racked up 2,370 yards, 144 catches, and 31 touchdowns in his three years to date. As a defensive back in 2020, Knotts recorded 55 tackles and even added in three interceptions.

Knotts has collected more than 20 Division-1 offers during his recruitment, so far. Some of these teams included Georgia, Miami, Texas, Ole Miss, and more.

The talented receiver, Knotts, has also taken three official visits in the month of June.

On June 11, Knotts took his first official visit to see the Georgia Bulldogs, who did not make his top-three. Then, one week later on June 18, Shaleak Knotts took a visit to see coach Josh Heupel and Tennessee.

Knotts’ last visit was to Maryland, just one week after he saw Tennessee.

A multi-sport athlete at Monroe High School, Knotts has played both basketball and football there. Knotts averaged 17.4 points, 7.3 rebounds, and 1.3 assists per game on the court in 2020.

Tennessee has 11 players currently committed to the class of 2022. The highest graded recruit in Tennessee’s class is four-star quarterback Tayven Jackson. However, the addition of Knotts would slide the talented wide receiver to the top spot.

According to Knotts on Twitter, he will announce his collegiate commitment on Saturday, Aug. 14. Shaleak Knotts will choose from North Carolina, Tennessee, and Maryland for his decision.