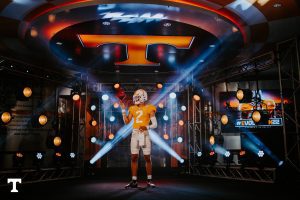 Four-star quarterback Tayven Jackson, the top-ranked recruit in the 2022 Tennessee football recruiting class so far, has officially been extended an invite to the 2022 Polynesian Bowl.

The Polynesian Bowl is “a premier all-star football game featuring the world’s elite high school players of Polynesian heritage and other ancestries,” according to the official website.

“I’m just looking forward to playing with the best, learning the culture, and having fun,” Jackson said to 247 Sports. “I’m very excited!”

Tennessee quarterback commit Tayven Jackson will take part in the fifth installment of the Polynesian Bowl. The game will be played on Saturday, Jan. 22, 2022.

Also, the 2022 Polynesian Bowl will take place in the beautiful state of Hawaii.

Aside from his Polynesian Bowl selection, Jackson has already had a very eventful career outside of his high school. Jackson recently participated in the Elite 11 camp finals and The Opening Invitational.

Jackson, the quarterback for Center Grove high school in Greenwood, IN, committed to Tennessee on April 28. Not to mention, since he committed, Jackson has been Tennessee’s highest-ranked recruit in the class.

Tayven Jackson committed to Tennessee over 33 other collegiate programs. In fact, some of these included SEC foes Auburn, Florida, Texas A&M, Missouri, and Ole Miss.

The four-star quarterback stands at 6-foot-4 and weighed in at 195 pounds, according to 247 Sports. Jackson is a very talented quarterback, and even though he is listed as a dual-threat, Jackson does have an SEC-caliber arm.

Coach Josh Heupel has already collected 11 commitments to the Tennessee 2022 class, with Jackson at the top.

Four-star quarterback and top-ranked Tennessee commit Tayven Jackson will play in the 2022 Polynesian Bowl on Jan. 22.