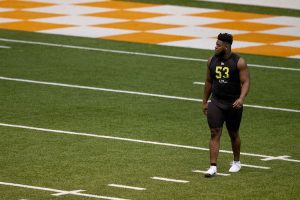 Former Tennessee offensive lineman Trey Smith might have fallen during the 2021 NFL draft, but he has seemingly risen up the Kansas City Chiefs’ depth chart just as fast.

Smith, a Tennessee offensive lineman from 2017-2020, was drafted with the No. 226 pick in the sixth round by the Chiefs. However, just one day into training camp, the former All-SEC First Team player has already made his way into the starting practice rotation.

“As full camp Day 1 wraps up: Trey Smith is starting, Willie Gay impressed, Chris Jones moved between DE and DT,” said Harold R. Kuntz, a reporter for Fox 4, in a tweet on Wednesday.

With Kansas City’s fall camp now in swing, Smith has had the opportunity to compete on the field again, doing what he does best. Not to mention, his play on the field has especially caught the attention of Kansas City head coach Andy Reid.

“He’s done a nice job. He showed enough to legitimately be in that position right now,” said Reid, according to Adam Teicher on Twitter. “He’s got to compete. We’ll see how all of that goes when we get the pads on.”

Smith worked out with the Chiefs starting offensive line without pads and was slotted in at the right guard position. Andy Reid also mentioned that Smith’s “consistency” during offseason programming led him to this spot.

On the first snap of Chiefs training camp, Smith was joined by Orlando Brown, Joe Thuney, Creed Humphrey, and Mike Renners on the line.

Thuney praised the entire line’s efforts after the opening day of training camp. However, he did also specifically mention Smith, as well.

“[Trey Smith is] really strong, he’s physical, he’s smart, he studies his playbook really hard,” said Thuney, according to USA Today Sports. “Everyone is communicating up there on the O-Line, but he’s doing a great job, and yeah, it’s just great to be part of this group.”

Trey Smith will have more opportunities as the Chiefs’ camp continues on. But, as long as he keeps his current pace, led by a great work ethic and determination, Smith should absolutely continue to succeed.

Back in May, Smith also addressed his prior health issues to the Kansas City media.

“I’ve been in absolute perfect health,” Smith said. “Having a great time, no issues recently at all. Obviously, things are uncontrollable, but once again, thankful to the Hunt family and the Chiefs organization for believing in me. I’m ready to roll.”