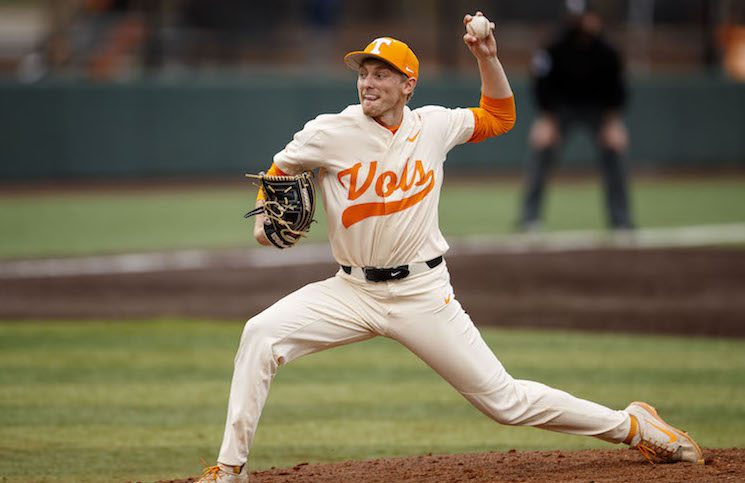 Tennessee reliever Redmond Walsh remembers the days when you could count the number of fans in Lindsey Nelson Stadium on gameday in seconds. Those games were plentiful when the lifelong Vol fan was growing up and in his first two seasons as a Tennessee pitcher.

That perspective made Tennessee’s magical 2021 season, one that saw the Vols win seven games on walk-offs and four on walk-off home runs, even more special for the Alcoa native.

“It’s unbelievable,” Walsh said of the environment at Lindsey Nelson Stadium this past spring. “You go to games as a kid and— I don’t even remember ‘05 games being that crowded— you go to games as a kid and kind of see stadium’s half full or even my freshman year we had midweeks where it felt like we may have 10 people at the game to now we have weekend series, super regionals, and regionals where the stadium is completely full and then you have an extra 1,000-2,000 fans sitting outside the stadium. It’s unbelievable. … Tennessee fans are the best in the world about being there for teams. They showed out unbelievably over the last weeks of the season.”

Walsh’s love of his home state school, teammates, and baseball made taking advantage of the NCAA’s COVID-19 relief and extra year of eligibility and returning to UT for one more season an easy decision.

“I have the rest of my life to work and I just enjoy baseball way too much to give it up,” Walsh told Rocky Top Insider this week.

Despite a season Walsh won’t soon forget, it wasn’t a year without adversity. Walsh entered his first senior campaign with a 1.32 ERA and didn’t give up an earned run before SEC play began.

However, Walsh struggled the first half of SEC play, blowing leads in the first two weekends of conference play and struggling throughout the first four series. Much of Walsh’s struggles came from the lefty adding a cutter to his repertoire, negatively affecting his changeup that is one of the best across college baseball.

“We kind of thought it would help and I finally found a grip I was comfortable with,” Walsh said. “It starts giving you the outside of the ball and I’m such a pronation guy. I throw sinker, changeup and those are my two go-to. I really get inside the ball and get it to run off. Once I started throwing that cutter, I started cutting changeups which I’d never done. That was really it and it was one of those things, throughout my career— as bad as it sounds— I really hadn’t struggled too much. It was a big learning point for me. … I ended up finishing the season out pretty well and I had conversations with coach Anderson and Richard Jackson about getting back to old fundamentals, old mechanics and old pitching habits. It really kind of got me back into a groove of being comfortable on the mound.”

While Walsh— who up to that point was splitting closing duties with Sean Hunley— was moved from the back end of Tennessee’s bullpen, the senior always remained a key piece of pitching coach Frank Anderson’s bullpen.

That faith from his coaches meant everything to Walsh.

“It’s awesome. That’s why this coaching staff has been as good as they have,” Walsh said. “Top-to-bottom, they push you to be great and they’re always there to help you. I can’t tell you how many times I’ve called Richard Jackson up or coach Anderson to talk about baseball or anything. That’s the one thing— you can trust them from making sure a pitch is right to if you have family issues. It’s comfortable. They’re people you can go to no matter what.”

Despite his struggles the first month of SEC play, Tennessee capitalized on a softer start to the conference schedule.

Major tests came for a Tennessee team climbing in the rankings and the Vols always seemed to answer the bell.

From series wins against Florida and South Carolina, competitive series losses to SEC powerhouses Vanderbilt and Arkansas, and a run to the SEC Championship game the moment never seemed too big for Tennessee.

That is an oddity for a team and program breaking onto the big stage for the first time in a decade and a half.

“I think it’s because we had each other’s backs, as corny as that sounds,” Walsh said. “We talk about all these walk-offs we had all year but I look back to one that was really big for me. We were playing LSU on a Saturday and we had a lead. I think I gave up a three-run home run and they end up tying the game. We get rained out and the game goes to Sunday. Drew Gilbert told me that morning and said ‘I got you right here’. Next at-bat he gets a single down the line to tie it up (with two outs in the ninth inning) and his next AB he hits a (walk-off) home run. If that doesn’t say we have each other’s back I don’t know what does. It’s one of those stories that will stick with me forever. Just knowing he was there for me and he came up big in a day that I didn’t have my best stuff means more to me than anything else. I think that’s what our whole season was about.”

The major caveat to that came in the College World Series. Tennessee went two-and-out, losing games to Virginia and Texas. The Vols didn’t play well in either game, especially against Virginia.

“I think we kind of made the situation a little bigger than it was at times,” Walsh said of Tennessee’s struggles in Omaha. “I think that’s what we were really good at all year. Never making the situation too big and playing our own ball. I think we changed who we were a little bit. In my opinion, I think we were the best team there. Top-to-bottom, hitting and pitching, our bullpen. I think next year we’ll go in with a different mentality of being less fans there and more wanting to win.”

Despite losing a large chunk of the core that got Tennessee to Omaha, the Vols won’t be short on talent in 2022.

Walsh will apply what helped Tennessee get to the College World Series and the lessons he learned from their failures in Omaha as a leader on Tony Vitello’s fifth Tennessee team.

More on that tomorrow in part two of our conversation with Walsh.