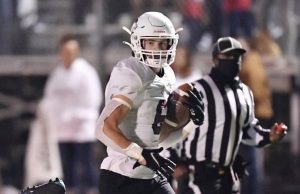 The Tennessee Volunteers received a commitment on Saturday night from Jack Luttrell, a three-star safety in the class of 2023. The Dacula, GA native is coach Heupel’s first official commitment into the 2023 class.

The lightning-fast safety only needed one word to announce his commitment: “Home.”

Tennessee initially offered Luttrell a scholarship on May 11. He then committed on July 31 while on an unofficial visit to Knoxville. But even in that short amount of time, the Tennessee fanbase had already made an immediate impact on him.

“I think the biggest thing that stood out to me since the offer is the fans,” Luttrell said in an interview with Rocky Top Insider. “It is crazy how many people are dedicated to Tennessee football.”

In fact, the newfound fame only ramped up in the short time after he committed.

“The other day, I’m in Knoxville, and I tweet, ‘This is my home. I’m committed,’ and then I went to eat dinner,” Luttrell said. “And someone was already like, ‘Hey, are you White Lightning? Did you just commit?’ It’s just crazy. The amount of fans that surround the campus and their love for the football team.”

When he committed as the first player in the 2023 class, Luttrell had one specific goal to show any potential prospects eyeing Tennessee.

“My biggest goal was just to show other kids how good Tennessee is,” Luttrell said. “Even before I got up there and talked to the coaches, I never knew what Tennessee was really like. All I knew was that the coaches change, and there’s a losing record. But as soon as I got up there, it was so different just being able to talk to coaches and learn about their future plans.”

Luttrell made his first trip to Knoxville on June 27, when he attended a Tennessee camp. When he arrived back on campus on July 31, he was ready to commit. For Luttrell, two individuals, in particular, played a big role in that.

“I’d say Tayven [Jackson], the quarterback that’s committed, and then coach Martinez, who is the position coach at Tennessee for me,” Luttrell explained. “Those two people, Tayven being a future player for Tennessee, and then coach Martinez being the coach, just really explained everything that they knew about the program. Basically what I’m getting myself into, and just what my future would look like there.” 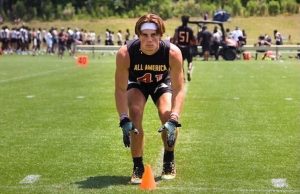 It wasn’t just about the fans and the lights around Tennessee. For Luttrell, the conversations he had with his future teammates mattered as they aligned their common goals. In addition, his honest conversations with coach Martinez instilled confidence in him that Tennessee would put him in a position to succeed.

But, at the same time, his own family was a significant factor in his decision, as well.

“It was definitely getting my family up there,” Luttrell said when asked about his decision to commit while on an unofficial visit. “The first visit, I didn’t have both of my parents there. My dad was up there, I was up there, and we were able to get the tour and all that. But the second time I was able to get up there, it was me, my mom, and my dad.”

Standing at six feet tall with a listed weight of 172-pounds, Luttrell is a multi-position athlete at Hebron Christian Academy. While in high school, Luttrell has played both safety and wide receiver. Not to mention, he even tweeted out that fans were “going to see some more QB highlights this year” on June 22. Regardless, with his range of abilities, Luttrell will collect valuable experience all over the field.

Jack Luttrell had collected six scholarship offers when he committed to Tennessee. Included in those were Texas A&M and Arkansas from the SEC, as well.

According to 247 Sports, the three-star safety is ranked as the 39th player in the state of Georgia. He is also the 39th overall safety in the class of 2023. Although, it is still very early in the ranking process, with more movement expected in the coming years.