After hoping to leave his mark heading into summer workouts, it turned out to be a tough spring for running back Tiyon Evans. After being sidelined due to an ankle injury, Evans was mostly off to the side during spring practice, as his teammates worked to gain traction on the starting position. But as Evans hit the field for fall camp, healthy and ready to go, he is looking to make up for the lost time.

“I most definitely have a chip on my shoulder. I feel like I haven’t really shown what I can do in the spring with my ankle injury. So, I am blessed with the opportunity right now, and I am going to take my chances and try to capitalize on every chance I get I got to.” 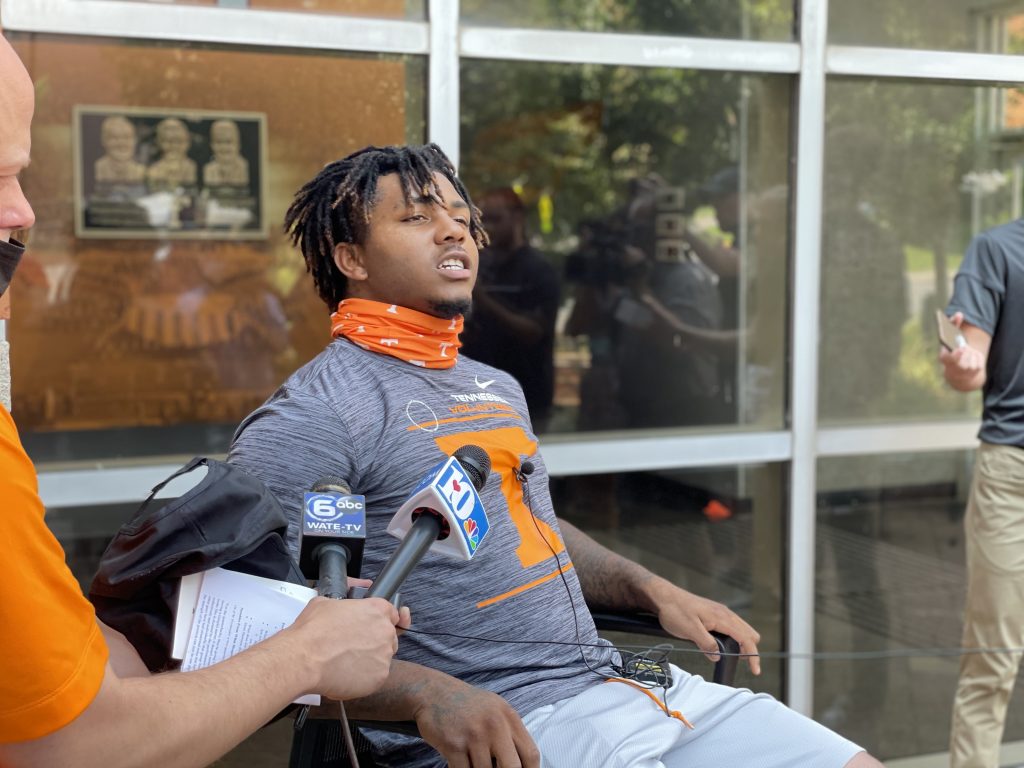 But for the team, Tiyon understood that building relationships off the field was just as meaningful, especially during some tough times for the program. As suspensions hit for multiple players and guys were fighting for spots in the rotation, there was also a bonding experience inside the locker room, which was needed, in his opinion.

“One thing in the spring we were working on was everybody building a bond outside of football. That’s one thing we really worked on in the spring. Everybody locked in, like in the spring we had multiple situations that y’all done heard about, so now everything is squared away, and we’ve been locked in from then on.”

During the time he was sidelined, Evans also focused on learning a completely new system, which caught him off-guard at first. Evans had never played in this type of offense or anything close to it.

So, it took extra time in the film room and learning from the coaches to get this system down, which is the case for most of this offense. The high octane, play as fast as possible, scheme was new to him but enjoyable, as he started figuring out the ends and outs of what his coaches wanted from them. So, you can probably imagine the shock when he first got to Knoxville and started studying the playbook. But for Evans, he loves what this uptempo offense brings to the table for this group.

“It’s so fast; I love it. You can catch the defense off-guard, just like that. The way we game plan, so, you know how many refs are on the field, and we’re constantly trying to move the ball, so soon as you say you get positive yards, you give the ball to the ump, and your constantly keeping the ball going. So, why is the defense waiting on us to get ready? We’ve already caught them off-guard. We got the ball snapped and maybe have a long play. They’re still coming, and we’ve already got the ball snapped. That’s what I like about it.”

Even though he enjoys the pace, the competition from the other running backs drives Evans to get better every day. But he appreciates the coaches letting it known that this will be an ongoing rotation of how they perform in practice, which means every day counts.

“There’s always going to be competition in the backfield,” Evans said. “Going into game week, Coach told us there will be two starters, but it’s never going to determine like, every week is going to be the same starters, it goes by practice, every week.” 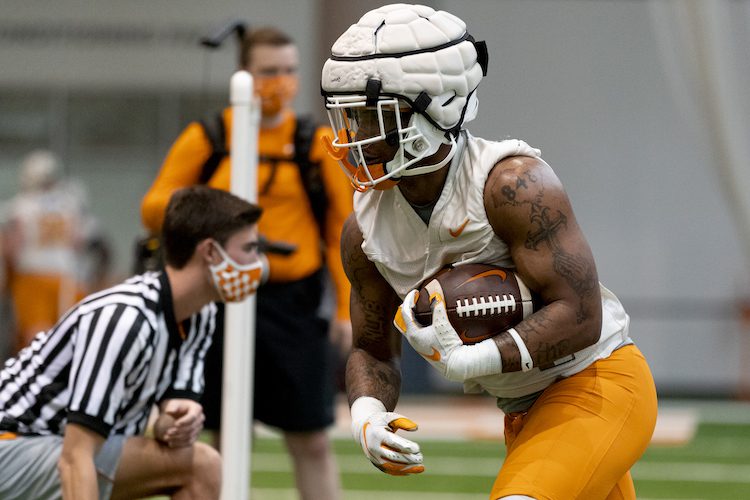 It’s typical for the running back to be one of the focuses from opposing teams, but Evans enjoys being a guy fighting for a spot. Even if it is a bit under the radar on a national scale, this group has the opportunity to surprise a lot of folks, which is something Tiyon looks forward to the most.

“I love being under the radar,” Evans said. “Being at Tennessee is the biggest thing I have ever did. I love it because when you go out there and do something, you see all the people trying to come be on your side. Just that right there shows that you’re doing something right.”

There is also a quarterback battle in front of him, which he said is being led by some true pros, especially with four different guys gunning for only one spot. But in his eyes, the group will flourish with whichever quarterback gets the starting nod.

“Those guys are pros,” Evans said on Thursday. “They are locked in. The way they move there self in the facility, it’s different. You can tell they are really trying to go get it. That’s what I like about them. They are all going to pick you up, coach you up, and they all coach each other up, even though they have this big competition going on. That’s what I like about them.”

If you wondered what a JUCO running back, who never set foot on Tennessee’s campus before signing, thought about his new city, Evans is the perfect guy to sell you on it.

“I fell in love with the place, especially when flying over it. But when I first got here, I had gotten covid, so I wasn’t able to live a regular life.”
Tiyon added, “I love Knoxville. I’ve already told everybody I plan on raising my family out here.”

If there is one player who could make a significant splash on offense this season that folks might be sleeping on just a bit, it’s Evans. He possesses the frame and speed to help the Vols in multiple ways out of the backfield this season, especially with his high motor.

So as Evans and his teammates continue trekking along during camp, he’s hoping they can catch the conference by surprise, which might be easier said than done, socially with the potential this group has.